What Is Nicotinamide Riboside? How Does It Work?

Nicotinamide riboside, which is also called niagen, is a form of vitamin B3. It serves as a precursor for nicotinamide adenine dinucleotide (NAD+), a coenzyme that’s needed for important body functions, like metabolism, energy production, regulating the body’s circadian rhythm and repairing DNA damage.

You may be used to seeing “niacin” as a common form of vitamin B3. Niacin is often added to packaged foods in order to reduce the risk of vitamin B3 deficiency.

Like other forms of vitamin B3, nicotinamide Riboside is converted by your body into Micotinamide Adenine Dinucleotide (NAD+), a coenzyme or helper molecule.

NAD+ acts as fuel for many key biological processes.

However, the amount of NAD+ in your body naturally falls with age.

Low NAD+ levels have been linked to health concerns like ageing and chronic illnesses, such as diabetes, heart disease, Alzheimer’s disease and vision loss. Interestingly, research has found that raising NAD+ levels helps reverse signs of ageing and lower the risk of many chronic diseases. Nicotinamide Riboside supplements have quickly become popular because they appear to be especially effective at raising NAD+ levels.

As we age, our NAD+ levels naturally decline, and low levels of the coenzyme have been linked to ageing and some common health conditions, like heart disease and neurodegenerative disease.

Nicotinamide Riboside has gained attention because of its ability to raise NAD+ levels. 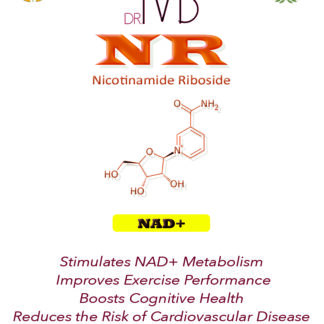