Our 10:1 Extract capsules give us 450mg of pure Fisetin

It acts as an antioxidant, increases GSH, maintains mitochondrial function in the presence of oxidative stress, has anti-inflammatory activity against microglial cells, and inhibits the activity of 5-lipoxygenase, signifying that fisetin causes reduction in the age-related decline in brain function

Fisetin is an antioxidant that’s found in fruits and vegetables, including strawberries, apples and cucumbers. According to research published in Frontiers in Chemistry, the flavonoid shows “potential as an anti-inflammatory, chemopreventive, chemotherapeutic and senotherapeutic agent.”

It’s getting a lot of attention because of its senolytic properties. A senolytic is a class of small molecules that are able to induce death of senescent (or deteriorating) cells and promote growth of new cells increasing the life of human health.

When taken along with our other Anti-ageing supplements like NMN, NR, Spermidine, Apigenin, Resveratrol, Long-Life, Fucoidan, Sulforaphane and others you can see a lot of Autography Activation and almost reversal of age.

1. Works as an Antioxidant

Research shows that fisetin has the ability to scavenge free radicals that have significant biological effects. These oxygen radicals can damage lipids, amino acids, carbohydrates and nucleic acids.

When we don’t consume enough antioxidant foods, there’s an imbalance of oxygen species that can inhibit the body’s ability to defend itself.

Research published in The Lancet found that fisetin is a flavonoid with potent senolytic activity in both mice and human tissues. This means that the antioxidant works to prevent the replication of damaged DNA, potentially playing a role in aging and age-related diseases.

When researchers tested 10 flavonoids — including resveratrol, rutin, luteolin, curcumin and fisetin — they found that fisetin was the most potent senolytic.

Data suggests that fisetin possesses antiproliferative properties against several cancers, which means that it may inhibit tumor cell growth. Researchers believe that it has potential value in cancer prevention and treatment, as it may reduce angiogenesis (the growth of new blood vessels) and suppress tumor growth.

If you’re looking to increase your consumption of anti-inflammatory foods, start reaching for those strawberries. Fisetin has proved to possess strong anti-inflammatory effects in cell culture and in animal models relevant to human diseases, according to research published in Advances in Experimental Medicine and Biology.

Because fisetin is a senotherapeutic, it may extend your health and life span. Research indicates that it promotes healthy aging by reducing oxidative stress and increasing glutathione levels, a major intracellular antioxidant.

Research shows that fisetin may help promote cardiovascular health in a number of ways.

One analysis reports that the antioxidant can induce cardiac regeneration by activating genes involved in cell proliferation. Researchers believe that it may protect from ischemic damage following a heart attack.

There’s some evidence that fisetin may help prevent stroke as well. An animal study found that fisetin, quercetin and aspirin showed significant prolongation of clotting time and thrombin time. 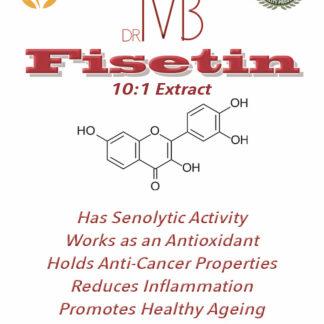