What is Saw Palmetto and a few of their benefits . . .

Saw palmetto extract is taken from the deep purple berries of the saw palmetto fan palm, which is known as Serenoa repens. Saw palmetto is a fan palm that grows as a tree or shrub and has lush, green leaves that fan out from its thorn stem. It can reach heights of 10 feet in warm climates, with leaf clusters that can reach two feet or more.

The plant is a native of West Indies, and in the United States, saw palmetto grows in the warm climates of the southeast coast, from South Carolina to throughout Florida.

Saw palmetto benefits have been known for centuries, and the plant has been used in traditional, eclectic and alternative medicine. Its active ingredients include fatty acids, plant sterols and flavonoids. The berries also contain high molecular weight polysaccharides (sugars), which reduces inflammation that’s at the root of most diseases and strengthen the immune system — thus adding immune system booster to the list of saw palmetto benefits.

The most common form of an enlarged prostate is benign prostatic hyperplasia — or BPH. The prostate gland can become inflamed or enlarged as men get older. The prostate then compresses the urethra, leading to difficulty with urination that results in bladder infections or bladder stones. BPH can be caused by a variety of circumstances, including hormonal changes (such as excess estrogen), deteriorating blood vessels and a zinc deficiency.

Research shows that saw palmetto inhibits testosterone from binding to and stimulating prostate cells, which reduces the multiplication of prostatic cells and prostatic enlargement. Other treatments for BPH, alpha blockers and 5-alpha-reductase inhibitors cause sexual dysfunctions themselves — while saw palmetto is a natural supplement that doesn’t have a long list of side effects. That makes it one of the best sources to increase testosterone naturally and improve prostate health the natural way.

One 2012 study conducted in Switzerland analyzed 82 patients in an eight-week trial; the patients took  one capsule of 320 milligrams saw palmetto extract daily. At the end of the treatment, the International Prostate Symptom Score was reduced from 14.4 ± 4.7 to 6.9 ± 5.2. Investigators’ and patients’ assessments confirmed the good efficacy, and treatment was very well-tolerated and accepted by the patients.

A systematic literature review of 11 studies identified saw palmetto supplements as one of the five commonly used forms of alternative medicine by men with prostate cancer.

Saw palmetto supplements work as 5-alpha reductase inhibitors — meaning they slow down the conversion of testosterone to DHT by blocking the enzyme and preventing its formation. According to research, DHT is responsible for prostate enlargement, which may be a cause of prostate cancer.

The science is still unclear on this matter, but studies on two 5-alpha reductase inhibitor prescriptions, Finasteride (Proscar) and Dutasteride (Avodart) found that men taking either drug were less likely to develop prostate cancer after several years than men getting an inactive placebo. The problem lies in the side effects of these medications — they can cause sexual side effects, such as lowered sexual desire and impotence.

Saw palmetto, on the other hand, can also inhibit DHT and help with urinary problems from BPH, such as trouble urinating and leaking urine, plus it regulates your testosterone levels, helps with libido and works as a natural remedy for impotence.

Studies have also found that saw palmetto inhibits the growth of prostatic cancer cells and may destroy dangerous cells. A study conducted at the Department of Biochemistry and Molecular Biology in Beijing found that saw palmetto induced growth arrest of prostate cancer LNCaP, DU145 and PC3 cells and down-regulated DHT, the hormone that leads to prostate enlargement.

Another interesting note about saw palmetto is the research that has been done to measure its effect on post-surgery recovery time. Prostate surgery (known as transurethral resection of the prostate or TURP) can require a lengthy recovery period, but research shows that taking 320 milligrams of saw palmetto daily for two months before prostate surgery can reduce the time spent in surgery. It also helps with blood loss, the development of problems during surgery and the total time spent in the hospital.

Saw palmetto extracts and supplements work as hair loss remedies because they keep testosterone levels balanced. As men age, the testosterone hormone is diminished and the hormone called 5α-Dihydrotestosterone (DHT) increases. The cause of hair loss is due to the hair follicles’ sensitivity to DHT, which is a male androgen hormone that causes follicles to shrink, resulting in a shorter life span and decrease of hair production.

Normally after hairs fall out, another hair starts to grow from this same follicle — but if DHT is high, hair growth decreases. Saw palmetto has the power to stop the conversion of testosterone into DHT, making it beneficial for hair growth.

Although the options about saw palmetto as an effective hair growth agent are mixed, there are studies that indicate its use as beneficial. One study conducted at the Clinical Research and Development Network in Colorado tested 34 men and 28 women, aged 18-48 years, who topically applied saw palmetto extract in lotion and shampoo base for three months; the results found that 35 percent of the participants had an increase in hair density.

Because saw palmetto inhibits the conversion of testosterone into DHT, the body retains normal levels of testosterone. This helps with weight loss, strength management, pain response, hair loss and sex drive. Today, low testosterone in males is rapidly growing, and this results in chronic fatigue, a stunt in libido and a decreased sense of well-being.

A case study reported in the American Journal of Medicine analyzed a 52-year-old man who was experiencing erectile dysfunction, low libido and fatigue. He took no medications and was otherwise healthy. The study suggests that his metabolic status improved dramatically by increasing his testosterone counts. After three months, he already felt more energized and his sexual function improved.

Saw palmetto supports the urological system in men who have benign prostatic hyperplasia. This occurs because of an interaction with the receptors in the lower urinary tract that can lead to urinary dysfunction and overactive bladder. Saw palmetto is also recommended to treat weakening urinary organs in elderly people or women after menopause because it strengthens the urinary organs and has been recommended as a natural remedy for kidney stones.

The Journal of American Medical Association released a 1998 review stating that saw palmetto is effective in improving urological symptoms and urine flow. For the review, 18 randomized trials with almost 3,000 male participants were analyzed; 28 percent of the men taking saw palmetto showed fewer urinary tract symptoms, 24 percent showed improvement in peak urine flow and overall urine flow improved for 43 percent of the participants. The results were comparable to the group taking Proscar — a prescribed medication — and they were much more promising than the men taking a placebo.

Another study done at the University of Chicago Pritzker School of Medicine involved 85 men who randomly received either saw palmetto for a placebo for six months. The results indicated that saw palmetto use leads to a significant improvement in urinary symptoms in men with lower urinary tract symptoms compared with placebo. This study shows that saw palmetto can be an effective home remedy for UTI. 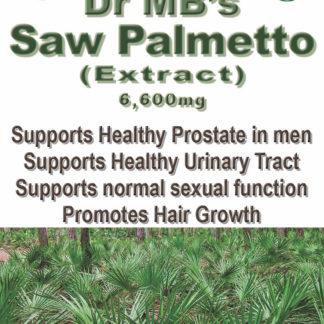