Our tablets are made from the Highest Strength, very potent Gingko Biloba Extract (50:1).

This is the strongest that you can ever see, so if your needing a strong powerful product, then we have the perfect one right here for you.

The therapeutic properties of the gingko plant are said to include treatment for blood disorders and memory problems, enhancement of cardiovascular function and to improve eye health.

Gingko is one of the oldest species of tree in the world. The trees can grow more than 130 feet tall and can live for over 1,000 years. Some trees in China are said to be over 2,500 years old.

Plant extracts are made from extracting the best parts of the plants and come in various extract strength ratios. So this means for every tablet (600mg of 50:1 extract) you will receive a dose equivalent to 30,000mg of whole plant.

According to the University of Maryland Medical Center (UMM), “Gingko is widely used in Europe for treating dementia.” Doctors started to use it because they thought it improved blood flow to the brain, but more recent studies indicate that it may protect nerve cells from damage in Alzheimer’s.

There is evidence indicating that gingko can help people with dementia, although more studies are required to confirm this.

One study found that an extract of gingko biloba, was clinically effective in treating Alzheimer’s dementia.

Other research, sup>5, published in JAMA, similarly concluded that gingko biloba extract was safe to use and possibly effective in stabilising and possibly improving cognitive and the social functioning patients with dementia for between 6 and 12 months.

Researchers believe that gingko improves cognitive function because it promotes good blood circulation in the brain and protects the brain and other parts from neuronal damage.

A study published in the Journal of Psychiatric Research7, found that people with generalised anxiety disorder who took gingko experienced better anxiety relief than those who took a placebo.

One small study observed improvements in the vision of people with glaucoma who took 500 milligrams a day of gingko over a period of 8 weeks. Some studies have also suggested that gingko may help people with macular degeneration to keep their sight for longer.

Some early research has shown positive effects of taking ginkgo on reducing PMS symptoms, including mood swings, headaches, anxiety, fatigue and muscle pain. It also appears to have beneficial effects on mood and cognition in postmenopausal women and can help improve similar symptoms.

One 2008 study published in the Journal of Alternative and Complimentary Medicine compared the effects on gingko biloba in two groups of women that were similar in terms of demographic characteristics and baseline overall severity of PMS symptoms.

After a six-month intervention with ginkgo, there was a significant decrease in the overall severity of physical and psychological symptoms in both the group taking 250 milligrams daily of gingko extract and the placebo group; however, a higher percentage of the ginkgo group (23.7 percent) had improvements compared to the placebo (8.7 percent).

It’s believed gingko has positive effects on hormonal balance — especially serotonin levels, blood pressure and circulation — therefore it might help some people struggling with erectile dysfunction and low libido. Gingko has the potential to dilate blood vessels and improve blood flow to the genitals, which is important for reproductive health.

Some studies have found gingko extract can reduce asthma-related symptoms. Because it lowers inflammation, improves antioxidant activity and has positive effects on nerve functioning, people have reported less trouble breathing when taking gingko.

Certain studies have found that gingko biloba benefits people experiencing painful haemorrhoids, which cause swelling, pain and bleeding because of an increase in pressure on the veins of the anus and rectum. Gingko can help lower pain, improve pain tolerance and decease inflammation, which helps to stop bleeding associated with haemorrhoids, making gingko biloba an effective haemorrhoids treatment.

Some studies have found that supplementing with CoQ10 and gingko together improved quality of life for people diagnosed with fibromyalgia, a disorder of the nervous system. Fibromyalgia is a widespread muscle pain typically accompanied by fatigue; headaches; and difficulty with sleep, anxiety and depression. Gingko biloba can be used as a natural fibromyalgia treatment. 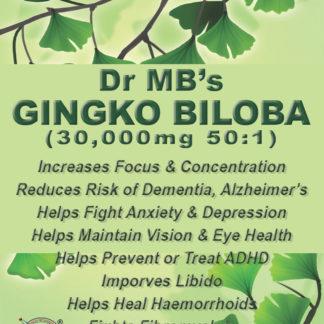