There’s more to pumpkin than meets the eye

You may think of pumpkin as a festive fall decoration or the ingredient for the perfect pie, but pumpkin has other uses. Pumpkin seed oil, for example, has certain health benefits.

Pumpkin seed oil is said to help promote urinary health and heart health. It’s full of vitamins and anti-inflammatory agencies, along with linoleic and oleic acid. Here’s what you need to know about this fruit’s potential health benefits. . . . .

Traditionally, pumpkin seed oil and pumpkin seeds in general have been said to boost mood and ward off depression. Past findings from the British Journal of Psychiatry, for example, showed positive results from giving pumpkin seeds to children with depression.

Effects on hair and skin

Pumpkin seed oil has been linked to positive effects on hair growth, especially in men. One study found that men who took 1000 milligrams of pumpkin seed oil every day for 24 weeks actually had 40 percent more hair growth than men in the placebo group. No adverse effects were found.

One animal study found that pumpkin seed oil not only helped lower cholesterol, but it also had anti-inflammatory effects. The oil has also been shown to lower blood pressure in mice.

Pumpkin seed oil, along with palmetto oil, has shown promising results as an alternative therapy for benign prostate hypertrophy (BPH). BPH is a common condition where the prostate becomes enlarged. This can be extremely painful and block the flow of urine.

A study of Korean men with BPH found that pumpkin seed oil may act as an effective alternative medicine with no adverse reactions. Participants in the study saw an improvement in symptoms, including better urinary flow. Researchers found that optimal results occurred when pumpkin seed oil was paired with palmetto oil.

In general, pumpkin seed oil seems to have a positive effect on the urinary tract. This tract is made up of the kidneys, the bladder, and the urethra, which connects the bladder to the urinary opening.

Researchers in a small study gave participants between 1000 and 2,000 milligrams of pumpkin seed oil. The participants saw a drastic improvement in their overactive bladder symptoms, including wetting themselves at night.

In one study, pumpkin seed oil was found to help relieve some of the symptoms of menopause. This included a decrease in hot flashes, joint pain, and headaches. The women taking pumpkin seed oil also had an increase in their HDL levels, which is the “good” cholesterol.

Diabetes has many causes, one of which is poor diet. Both type 1 and type 2 diabetes are manageable, and even treatable, with good diet strategies and supplements. Possibly due in part to its low glycemic load (along with other factors), pumpkin seed oil is scientifically proven to be a considerable antihyperglycemic, or natural diabetes treatment. 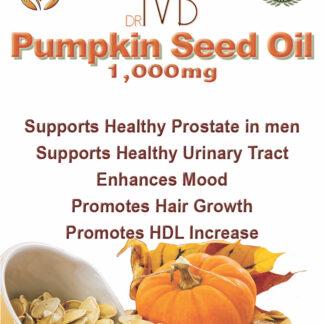