Icariin is also a vasodilator, helping to increase blood flow, and has some anti-inflammatory abilities. Another effect that research suggests icariin may have is inhibiting an enzyme called acetylcholinesterase (AChE), which has effects on neurotransmitter synapses and various neuromuscular functions. Use of icariin has been associated with positive changes in body composition — such as increased muscle mass, strength and bone growth — which can enhance performance, energy and even confidence.

After sexual stimulation, nitric oxide (NO) is released in order to dilate the blood vessels of the corpus cavernosum (tissue that forms the penis) in order to produce an erection. While this is happening a compound called cyclic guanosine monophosphate (cGMP) accumulates, which can be broken down by the substance PDE5. Because icariin has the ability to stop PDE5 from doing this, it boosts nitric oxide’s effects even more, helping to sustain an erection.

In one study, when icariin was administered as a daily supplement, it significantly improved penile functional outcomes compared to the control group. In the group treated with icariin, increased nitric oxide levels and smooth muscle effects were observed that led to reduced ED symptoms caused by nerve damage.

Icariin has been shown to have natural testosterone-mimicking properties, one reason it helps to improve sexual desire, strength and even athletic performance. In one study a group was given icariin extract, researchers found that icariin improved the overall condition of reproductive organs and increased the circulating levels of testosterone compared to those that were not given the extract.

4. Helps Balance Hormones During or After Menopause

In TCM, Yin Yang Huo is considered to help promote “yin” energy, restoring energy levels and balance. With it’s “spicy, sweet and warm” properties, it’s helpful for people who are feeling fatigued or “yin deficient,” especially those going through hormonal changes such as menopause.

In some studies icariin has had positive effects on lean muscle production. Research published in the Journal of Sexual Medicine states “ICA (icariin) may have neurotrophic effects in addition to known phosphodiesterase type 5 inhibiting effects.”

Neurotrophins are types of proteins that help with development, growth and function of neurons. It’s suspected that icariin helps the body secrete proteins that allow cells to grow and contribute to tissue repair.

It’s not uncommon for those looking to “bulk up” and put on muscle mass, such as athletes and body builders, to use icariin as an active ingredient in supplements. Its use has also been linked with improved recovery following exercise and better athletic performance. Although it isn’t considered to be a stimulant and doesn’t work the same way that something like caffeine does, some find that taking supplements containing icariin can help improve their strength, stamina and endurance. 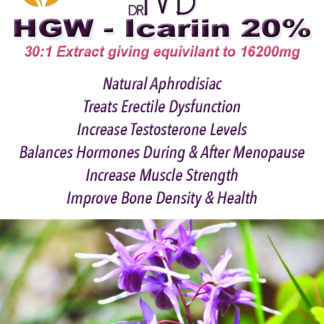