We bring to you in one of the strongest forms giving an equivalent of 14,000mg per capsule of natural Ginseng.

To learn about this amazing 100% Natural Herb you need to read this article. . .

There are 11 species of ginseng, all belonging to the genus Panax of the family Araliaceae;

The botanical name Panax means “all heal” in Greek.

The name “ginseng” is used to refer to both American ginseng (Panax quinquefolius) and Asian or Korean ginseng (Panax ginseng). The true ginseng plant belongs only to the Panax genus, so other species, such as Siberian ginseng and crown prince ginseng, have distinctively different functions.

A controlled study done at the Brain Performance and Nutrition Research Centre in the United Kingdom involved 30 volunteers who were given three rounds of treatments of ginseng and placebo. The study was done to gather data about ginseng’s ability to improve mood and mental function. The results found that 200 milligrams of ginseng for eight days slowed the fall in mood, but also slowed the participants’ response to mental arithmetic. The 400 milligram dose improved calmness and improved mental arithmetic for the duration of the eight-day treatment.

Another study done at the Division of Pharmacology at the Central Drug Research Institute tested the effects of Panax ginseng on rats with chronic stress and found that it has significant anti-stress properties and can be used for the treatment of stress-induced disorders. The 100 milligram dose of Panax ginseng reduced the ulcer index, adrenal gland weight and plasma glucose levels — making it a powerful medicinal options for chronic stress and a great ulcer natural remedy and way to heal adrenal fatigue.

Ginseng stimulates brain cells and improves concentration and cognitive activities. Evidence shows that taking Panax ginseng root daily for 12 weeks can improve mental performance in people with Alzheimer’s disease. One study done at the Department of Neurology at the Clinical Research Institute in South Korea investigated the effectiveness of ginseng on the cognitive performance of patients with Alzheimer’s disease. After ginseng treatment, the participants showed improvements, and this upscale trend continued for three months. After discontinuing ginseng treatment, the improvements declined to the levels of the control group.

This suggest ginseng works as an Alzheimer’s natural treatment. Although more research on this topic is needed, one preliminary study found that a combination of American ginseng and ginkgo biloba helps naturally remedy ADHD.

An interesting study done in Korea measured the beneficial effects of Korean red ginseng on children after chemotherapy or stem cell transplantation for advanced cancer. The study included 19 patients who received 60 milligrams of Korean red ginseng daily for one year. Blood samples were collected every six months, and as a result of the treatment, the cytokines, or small proteins that are responsible for sending signals to the brain and regulating cell growth, decreased rapidly, which was a significant difference from the control group. This study suggests that Korean red ginseng has a stabilizing effect of the inflammatory cytokines in children with cancer after chemotherapy.

A 2011 study published in the American Journal of Chinese Medicine done on rats also measured the impact that Korean red ginseng has on inflammatory cytokines; After giving rats 100 milligrams of Korean red ginseng extract for seven days, the ginseng proved to significantly reduce the extent of inflammation — the root of most diseases — and it improved the damage that was already done to the brain.

Another surprising ginseng benefit is its ability to work as a natural appetite suppressant. It also boosts your metabolism and helps the body burn fat at a faster rate. A study done at the Tang Center for Herbal Medicine Research in Chicago measured the anti-diabetic and anti-obesity effects of Panax ginseng berry in adult mice; The mice were injected with 150 milligrams of ginseng berry extract per kilogram of body weight for 12 days. By day five, the mice taking the ginseng extract had significantly lower fasting blood glucose levels. After day 12, the glucose tolerance in the mice increased and overall blood glucose levels decreased by 53 percent. The treated mice showed weight loss, too, starting at 51 grams and ending the treatment at 45 grams.

A similar study done in 2009 found that Panax ginseng plays a vital role in the anti-obesity effect in mice, which suggests the clinical importance of improving the management of obesity and related metabolic syndromes with ginseng.

Taking powdered Korean red ginseng seems to improve sexual arousal and treat erectile dysfunction in men. A 2008 systematic review included 28 randomized clinical studies that evaluated the effectiveness of red ginseng for treating erectile dysfunction; The review provided suggestive evidence for the use of red ginseng, but researchers believe that more rigorous studies are necessary in order to draw definitive conclusions.

Research done in 2002 at the Department of Physiology at Southern Illinois University’s School of Medicine indicates that ginseng’s ginsenoside components facilitate penile erections by directly inducing the vasodilatation and relaxation of the erectile tissue. It’s the release of nitric oxide from endothelial cells and perivascular nerves that directly affect the erectile tissue.

The university’s research also indicates that ginseng affects the central nervous system and significantly alters the activity in the brain that facilitates hormonal behavior and secretion.

Ginseng treatment has significantly decreased lung bacteria, and studies involving rats have shown that ginseng can stop the growth of cystic fibrosis, a common lung infection. In one 1997 study, rats were given ginseng injections, and after two weeks, the treated group showed a significantly improved bacterial clearance from the lungs.

Research also shows another ginseng benefit is its ability to treat a lung disease called chronic obstructive pulmonary disease (COPD), which is characterized as chronically poor airflow that typically worsens over time. According to the research, taking Panax ginseng by mouth seems to improve lung function and some symptoms of COPD.

Another study done at the Human Cognitive Neuroscience Unit in the United Kingdom found that Panax ginseng causes a reduction in blood glucose levels one hour after the consumption of glucose, confirming that ginseng possess glucoregulatory properties.

One of the primary difficulties with  type 2 diabetes is that the body is not responsive enough to insulin. One study found that Korean red ginseng improved insulin sensitivity, further explaining ginseng’s ability to help lower blood sugar levels and help those struggling with type 2 diabetes.

Research has shown that ginseng possesses powerful anticancer properties because of its ability to inhibit tumor growth. Although more research is needed on this subject, reports conclude that it’s the improvements in cell immunity involving T cells and NK cells (natural killer cells), along with other mechanisms such as oxidative stress, apoptosis and angiogenesis, that gives ginseng its anticancer properties.

Scientific reviews state that ginseng mitigates cancer through anti-inflammatory, antioxidant and apoptotic mechanisms to influence gene expression and stop tumor growth. This shows ginseng may work as a natural cancer treatment. A number of studies have focused on ginseng’s particular effect on colorectal cancer as about 1 in 21 people in the U.S. will get colorectal cancer during their lifetime. Researchers treated human colorectal cancer cells with steamed ginseng berry extract and found the anti-proliferation effects were 98 percent for HCT-116 and 99 percent for SW-480 cells. When researchers tested steamed American ginseng root, they found results comparable to that of the steamed berry extract.

Another well-researched ginseng benefit is its ability to boost the immune system — helping the body fight off infection and disease. The roots, stems and leaves of ginseng have been used for maintaining immune homeostasis and enhancing resistance to illness or infection.

Several clinical studies have shown that American ginseng improves the performance of cells that play a role in immunity. Ginseng regulates each type of immune cell, including macrophages, natural killer cells, dendritic cells, T cells and B cells.

Research involving mice showed that ginseng decreased the number of bacteria present in the spleens, kidney and blood. Ginseng extracts also protected mice from septic death due to inflammation. Reports show that ginseng also has inhibitory effects on the growth of many viruses, including influenza, HIV and rotavirus.

Pesky symptoms such as hot flashes, night sweats, mood swings, irritability, anxiety, depressive symptoms, vaginal dryness, decreased sex drive, weight gain, insomnia and thinning hair tend to accompany menopause. Some evidence suggests that ginseng can help decrease the severity and occurrence of these. A systematic review of randomized clinical trials found that in three different trials, Korean red ginseng had the efficacy to boost sexual arousal in menopausal women, increase well-being and general health while decreasing depressive symptoms and better improve menopause symptoms on the Kupperman’s index and Menopausal Rating Scale as compared to the placebo group. A fourth study found no significant difference in the frequency of hot flashes between the ginseng and placebo group.

Be the first to review “Dr MB’s Panax Ginseng 20:1 Extract” 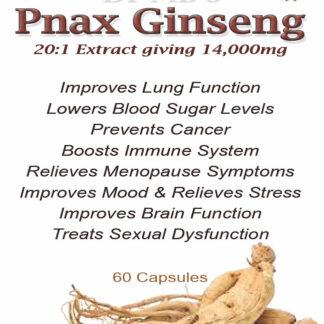