One of the strongest available in the world with 1000mg per capsule which has very high bio-availability.

What Is Aspartic Acid?

The aspartic acid structure is almost the same as alanine, another amino acid, but with one of the beta hydrogens replaced by a carboxylic acid group. Aspartic acid and oxaloacetate, a compound that is known to boost brain health, are interconvertible and can transfer from one amino group to another.

The two forms of the aspartic acid amino acid play different roles in the body. L-aspartic acid is produced by the human body and serves as a building block for proteins, like other amino acids.

D-aspartic acid, on the other hand, isn’t used to build proteins but works to produce and release hormones in the body.

The amino acid occurs naturally in the body and is found in the nervous and endocrine systems of humans and many animals. Studies involving humans show that DAA is found in the central nervous system, as well as endocrine organs, including the pineal gland, pituitary gland, pancreas, adrenal gland and testes.

But as we age the production of DAA keeps reducing and for people with active lifestyle need to supplement DAA.

These hormones regulate the body’s many physiological processes, including reproduction, sleep, blood pressure and energy utilisation. Without the proper production and synthesis of hormones, our bodies wouldn’t be in balance — or homeostasis.

We know that D-aspartic acid plays a major role in hormone production and release. This promotes the regulation of various body activities, including blood pressure, sleep patterns, use of energy, reproduction, digestion, appetite changes and metabolism. By consuming foods high in aspartic acid, you work to balance your hormones naturally.

The studies on DAA supplements for boosting hormone regulation are mixed, but in vitro rat studies have demonstrated that it increases levels of testosterone, luteinizing hormone, progesterone and growth hormone. There is some evidence in humans that D-aspartic acid may work to increase testosterone levels. DAA may help increase hormone production by accumulating in the pituitary gland and testes, triggering a hormonal response.

Like its effects on testosterone levels, the research on D-aspartic acid for male fertility though limited, but there are some promising studies. One study published in Advances in Sexual Medicine found that supplementation of D-aspartate significantly increased the concentration and motility of sperm in a group of 360 males.

In patients with low sperm counts and sperm motility, the increase of sperm concentration was found to be twofold. Researchers found that using DAA for a 90-day period improved the rate of pregnancies of their partners, with 27 percent of them becoming pregnant during the study.

Is D-aspartic acid a banned substance?

Even though DAA supplements are sometimes used to improve muscle gain and strength, it is not banned by the World Anti-Doping Agency.

DAA supplements are commonly used to increase testosterone levels. A typical D-aspartic acid dosage is between 2.5–3 grams per day. According to research conducted at the University of Western Sydney in Australia, “We are currently recommending a maximum of three grams of DAA once to twice a day and these recommendations have been drawn from the dosage studies in humans.”

Taking D-aspartic acid before bed or after workouts is the most common. 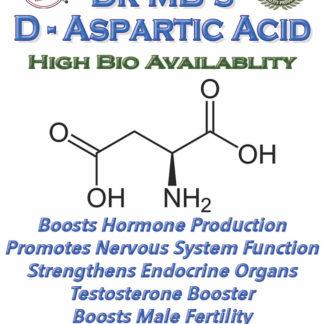