Our 100% Pure, Pharmaceutical Grade with High Bio Availability is 500mg each capsule.

What Is Leucine? and what is Leucine’s Role in the Body

Leucine is an essential amino acid that is integral to the synthesis of muscle. The leucine structure contains an alpha-amino group, an alpha-carboxylic acid group and a side chain isobutyl group, making it a branched-chain amino acid. Branched-chain amino acids cannot be produced by the body and need to be obtained from food sources. These amino acids are broken down in the muscles instead of the liver, helping to enhance energy production and muscle synthesis during exercise.

However, leucine is often considered preferable to other branched-chain amino acids because it’s broken down and absorbed more rapidly, allowing it to be used more readily than other types, such as isoleucine and valine.

The leucine amino acid can also be broken down directly into acetyl-CoA, making it one of the most important ketogenic amino acids in the body. While most other amino acids are converted into glucose, the acetyl-CoA formed from leucine can be used to make ketone bodies.

L-leucine is a popular supplement among bodybuilders and athletes due to its powerful effects on muscle gaining. As one of the key amino acids involved in muscle synthesis, it may help trigger muscle building to optimise your workout.

However, research has turned up mixed results on the potential effects of this amino acid. One long-term study out of France, for example, found that leucine was much more effective in promoting muscle growth and enhancing performance when it was combined with other amino acids rather than consumed alone. Including a good variety of protein foods in your diet can help maximise the effects of leucine by providing a wide array of amino acids and essential nutrients to fuel muscle growth.

As you get older, there are a lot of changes that happen in your body. Sarcopenia, the gradual deterioration of skeletal muscles, is one of the most notable effects of advanced age. This condition can cause weakness and decreased stamina, leading to a decline in physical activity.

Leucine is believed to help slow muscle deterioration to decrease the effects of ageing. One study conducted at the University of Texas Medical Branch’s Department of Internal Medicine and published in Clinical Nutrition showed that it helped improve muscle synthesis in older adults consuming the recommended amount of protein per meal. Another human model, conducted in France and referenced above, had similar findings, reporting that leucine supplementation was also able to limit weight loss caused by malnutrition in elderly participants.

In addition to using leucine for bodybuilding, both professional and novice athletes alike often turn to this essential amino acid looking to bump their physical performance up to the next level.

One study conducted at the Institute of Sport and Exercise Science at James Cook University in Australia and published in the European Journal of Applied Physiology reported that taking leucine supplementation for six weeks significantly improved both endurance and upper-body power in competitive canoeists. Similarly, another study published in the European Journal of Clinical Nutrition in 2016 showed that leucine supplementation enhanced lean tissue mass and improved functional performance in older adults.

If you’re looking to build muscle and simultaneously shed some extra body fat, leucine may be just what you need. In fact, several studies have found that it can have some powerful effects when it comes to fat loss.

An animal model out of the University of São Paulo’s Department of Food Science and Experimental Nutrition in Brazil showed that supplementing rats with a low dose of leucine for a six-week period resulted in increased fat loss compared to a control group. According to a 2015 review in Nutrients, this amino acid has also been shown to decrease fat accumulation during ageing and prevent the development of diet-related obesity.

Cramps and sore muscles are pesky problems that many people face after hitting the gym. Following an especially intense workout, these muscle aches can sometimes even be enough to keep you from the gym a few days, completely throwing off your schedule and delaying your fitness goals.

Studies have found some promising results on the potential role of leucine in muscle recovery. A review from the Department of Food Science and Human Nutrition at the University of Illinois reported that consuming leucine right after working out can help stimulate muscle recovery and muscle protein synthesis. Another study conducted at the School of Sport and Exercise and the Institute of Food, Nutrition and Human Health at Massey University in New Zealand demonstrated that supplementation with this amino acid improved recovery and enhanced high-intensity endurance performance in male cyclists after training on consecutive days.

7. Reduces the Risk of Hardening of the Arteries (Atherosclerosis)

In rat studies, leucine supplementation decreased LDL by 41% and increased HDL by 40%. 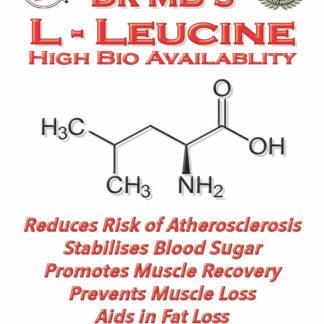