Equivalent to 10,000mg per Capsule

This is the most powerful Berberine available in the world.

Berberine comes to us from Japan from the Amur Cork Tree Bark, where it was first used in traditional medicine.

The active constituents of this herb are berberine, jatrorrhizine, magnoflorine, candicin, palmatin, obacunone, 7-dihydro stigmasterol, beta-sitosterol, and campesterol. Amur cork tree has both antimicrobial and antibiotic properties due to the alkaloids present in the plant.

Berberine extracts and supplements, are safe and well-known for their broad antibacterial activities, and can help naturally treat conditions without always resorting to antibiotics.

The study shows that the diet based on plants lowers the chances of prostate cancer. The effect of Nexrutine was examined which an herbal extract is made from the Bark of the Amur Cork Tree, for its astringent, anti-diarrheal and anti-inflammatory properties. It inhibits the proliferation of tumor cells by induction of apoptosis and also inhibits the signaling of cell survival.  The results shows that the treatment of Nexrutine inhibit proliferation of androgen independent  and androgen responsive human prostate cancer cells with apoptosis induction.

Phellodendron amursense, Cinnamomum cassia and Astragalus membranaceus was used traditionally for the treatment of inflammatory diseases and osteoporosis. It raised the mineral density of bones and prevents decrease of trabecular bone volume, trabecular number, connectivity density, thickness, trabecular number and separation at femur neck and total femur. The serum levels of phosphorus and calcium was decreased in OVX rats and increase in low density lipoprotein, cholesterol, osteocalcin, phosphatase, bone morphogenetic protein-2 and C-telopeptide type 1 collagen. The results shows that BHH10 has the ability to reverse osteoporosis in OVX rats as it stimulates the formation of bones and regulates bone resorption and as it is not related with toxicity.

As the rate of diabetes rises steadily around the world, studies show that berberine deserves a place among other natural remedies for diabetes. During one study, berberine was found to lower blood glucose, helping prevent and treat type II diabetes and its complications, including diabetic cardiovascular disease and diabetic neuropathy.

One of the most impressive studies compared taking 500 milligrams of the compound two to three times daily for three months with taking the common diabetes drug metformin. Berberine was able to control blood sugar and lipid metabolism as effectively as metformin, with researchers describing it as a “potent oral hypoglycemic agent.”

Sodium caprate, another chemical compound, helps with the absorption of berberine, and together, they’ve been shown to “suppress hepatic gluconeogenesis in rat model of diabetes at least in part via stimulation of AMPK activity and this action of BER is augmented by sodium caprate.”

Thanks to its effects on insulin sensitivity, this diabetes-fighting effect may also help prevent kidney damage. For example, research published in the International Journal of Clinical & Experimental Pathology examined the effects of this alkaloid on rats fed a high-fat diet to induce kidney damage. Here’s what researchers found:

A separate study found that the combined administration of red yeast rice — well-known for its ability to naturally lower cholesterol — and berberine may provide a broader range of cholesterol protection with a lower risk of serious adverse effects compared with prescription statin therapy. Berberine also has been shown to decrease abnormally high concentrations of fats and lipids in the blood of hamsters by promoting the excretion of cholesterol from the liver and inhibiting the intestinal absorption of cholesterol.

Furthermore, research from the Department of Veterans Affairs Palo Alto Health Care System in California published in the Journal of Biological Chemistry found that “administration of BBR to hyperlipidemic mice and hamsters lowered circulating PCSK9 concentrations and hepatic PCSK9 mRNA levels without affecting the gene expression of HNF1α.”

What does this mean? It means berberine inhibit PCSK9, which, as research from Harvard Medical School notes, helps lower cholesterol.

Due to serious adverse effects and the limited effectiveness of currently available pharmaceutical therapies for obesity, many research efforts focus on the creation of natural treatments for obesity — including anti-obesity drugs from natural products.

Along those lines, berberine is one of the few compounds known to activate adenosine monophosphate-activated protein kinase or AMPK. AMPK is an enzyme inside the human body’s cells, which is often called a “metabolic master switch” since it plays a crucial role in regulating metabolism. AMPK activation boosts fat burning in the mitochondria. Studies have demonstrated that berberine can fat accumulation in the human body.

In one pilot study published in Phytomedicine, obese human subjects (caucasian) were given 500 milligrams of berberine orally three times per day for a total of 12 weeks. The efficacy and safety of the treatment was determined by measurements of body weight, comprehensive metabolic panel, blood lipid and hormone levels, expression levels of inflammatory factors, complete blood count and electrocardiograph. Overall, this study demonstrated that berberine is a potent lipid-lowering compound with a moderate weight loss effect.

The promising results seen so far provide a convincing and substantial basis to support further scientific exploration and development of the therapeutic potential of this alkaloid against neurodegenerative diseases.

Patients who suffer from small intestine bacterial overgrowth (SIBO) symptoms have excessive bacteria in their small intestines. Present conventional treatment of SIBO is limited to oral antibiotics with inconsistent success. More and more, people who suffering from SIBO are interested in using complementary and alternative therapies for their gastrointestinal health.

The objective of one study published in Global Advances in Health and Medicine was to determine the remission rate of SIBO using an antibiotic versus an herbal remedy. It found that the herbal treatment, which included berberine, worked just as well as antibiotic treatment and was equally safe.

Part of berberine’s positive effect on heart health likely stems from the compound’s ability to help keep blood sugar levels and obesity in check, both of which can raise the risk of coronary heart disease. It also stimulates the release of nitric oxide, a signaling molecule that relaxes the arteries, increases blood flow, lowers blood pressure and protects against arteriosclerosis.

In research published by the University of Maryland Medical Center, people who took berberine for eight weeks had better heart function and were better able to exercise than those who took a placebo. The recommended dosage from this study was 300 to 500 milligrams four times per day. The cardiovascular effects of berberine also suggest its possible clinical usefulness in the treatment of arrhythmias and heart failure.

Berberine’s potent anti-inflammatory properties are also excellent for lung health. In fact, this alkaloid has been shown to reduce the effect of cigarette smoke-induced acute lung inflammation.

Be the first to review “Dr MB’s Berberine Extract 25:1” 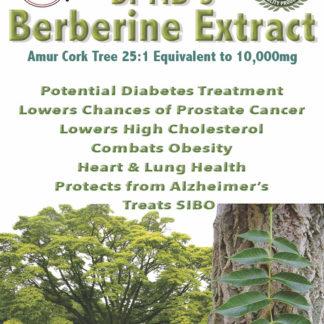