Have you heard of andrographis? This remarkable plant has been used for centuries in Asia as a traditional medicine for a range of ailments.

It’s also an important constituent of at least 26 Ayurvedic formulas, and today it’s touted as a top antiviral herb and remedy for respiratory conditions.

It’s a multifaceted plant that can be added to your natural remedy medicine cabinet.

Research indicates that andrographis possesses several constituents with unique biological properties. Extracts and pure compounds of the plant have been shown to possess antimicrobial, antioxidant, anti-inflammatory, anti-diabetic and immunostimulant functions.

Here’s a breakdown of the plant’s specific health benefits and uses:

Andrographis is used to shorten the duration of cold symptoms, including sore throat and cough. Traditionally, the plant has been used in Indian and Chinese herbal medicine for colds, influenza and cough.

Studies indicate that the plant’s extracts appear to be beneficial and safe for relieving respiratory symptoms and shortening time to symptom resolution.

Andrographis is known as a cold-property herb that’s used to rid the body of heat and fever. Research has revealed that it’s also used to dispel toxins from the body.

The plan works to combat infections, fight inflammation and boost immunity as well.

Research suggests that andrographolide, the main compound in the plant, can significantly reduce inflammation that’s caused by histamine, adrenaline and dimethyl benzene.

Because of its anti-inflammatory effects, andrographis has been used to relieve health conditions including ulcerative colitis and rheumatoid arthritis.

Traditionally, andrographis has been used to relieve symptoms of respiratory infections and boost immunity. It possesses antimicrobial and antiviral properties that have been proven to fight infections.

The plant’s compounds have displayed antibacterial activity against Salmonella, Shigella, E. coli and Staphylococcus aureus. Research also concludes that andrographolide has antiviral properties and is able to restrain virus replication and virus-induced pathogenesis.

5. Works as an Antioxidant

Studies show that andrographis contains antioxidants that protect components of the human body from oxidative damage. A. paniculata has been found to significantly increase the activity of antioxidant defense enzymes.

6. May Have Anticancer Effects

There’s some research suggesting that andrographis has anticancer effects. It has exhibited potent cytotoxic activity against cancer cells, and the main compound in the plant, andrographolide, is believed to have strong anticancer activity that induces cell changes.

Studies have found that andrographis extract has anti-diabetic potential, and research published in Frontiers in Pharmacology indicates that andrographolide has a potential role in the management of metabolic syndrome. Although more research is needed, the plant has been used in folk medicine for diabetes and liver dysfunctions.

Beyond these proven benefits, there are studies suggesting that compounds in andrographis also help improve the following health issues: 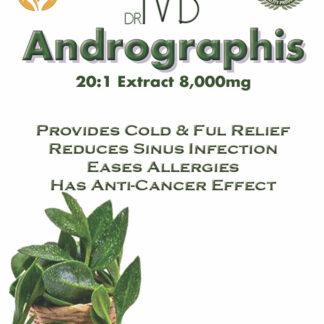