Tribulus Terrestris is a herb from Ayurveda that is mostly recommended for male health including virility and vitality, and specifically more catered towards cardiovascular and urogenital health. It is a common supplement for its libido enhancing properties and supposed testosterone boosting properties.

On the sexual side of things, tribulus does appear to be a relatively reliable and potent libido enhancer in rats and the lone human study assessing this has confirmed an increase in sexual well being and erectile function. While it is not exactly known how tribulus works, it is known to enhance androgen receptor density in the brain (muscle tissue not confirmed) which may enhance the libido enhancing properties of androgens. Limited evidence suggests that it is weak to non-effective in enhancing fertility.

Tribulus Terrestris is a plant from Ayurveda where the root and fruits are used for male virility and general vitality, respectively. The roots enhance libido and sexual well being without affecting testosterone while the fruits appear to be potently protective of organ function.

A decrease in cholesterol levels has been noted with tribulus supplementation

A decrease in blood pressure has been noted in hypertensive subjects; insufficient evidence to address efficacy in normotensive persons

Tribulus is a plant used in both traditional chinese medicine and ayurveda for purposes mostly related to cardiovascular health, virility, and urogenital health 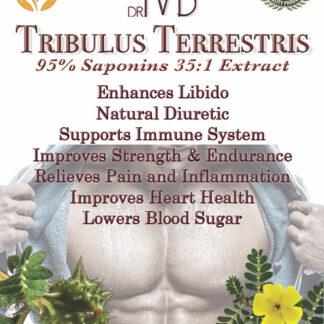