Vitamin B3, also called niacin and niacinamide, is an important water-soluble vitamin.

Vitamin B3, which is usually medically referred to as niacin, comes in 3 forms: nicotinic acid, Niacinamide and Inositol Hexaniacinate. Vitamin B3 niacin has been studied extensively and shows positive results treating a wide range of many commonly occurring health problems.

Niacin is an important vitamin for maintaining a healthy cardiovascular system and metabolism- especially balancing blood cholesterol levels. In addition niacin helps with brain function, healthy skin formation and maintenance and even preventing or treating diabetes.

Health Benefits of Vitamin B3 / Niacin

While there are some known niacin side effects that could potentially be dangerous, there are also many benefits to taking niacin and consuming foods rich in niacin.

Vitamin B3 niacin is considered an important treatment option for helping to reduce dangerously high cholesterol levels. Niacin has been proven to lower the risk of cardiovascular disease in patients with mixed dyslipidemia.  Dyslipidemia is an elevation of plasma cholesterol, triglycerides, or both.

In studies, supplementing with niacin has been shown to be very beneficial for those who are at an increased risk for heart attack, stroke, or other forms of heart disease due to having high LDL cholesterol levels (the “bad” kind of cholesterol), low levels of HDL cholesterol (the “good” kind)  and elevated triglyceride levels.

Several studies have shown that vitamin B3 niacin can boost levels of good HDL cholesterol and lower triglycerides just as well as certain prescription drugs when given in high doses.

Aside from helping to balance cholesterol levels and triglycerides, vitamin B3 niacin has other benefits for heart health, including the ability to reduce atherosclerosis, which is the dangerous hardening of the arteries that can lead to heart disease.

Niacin plays a part in the reduction of inflammation and production of histamine, which is a chemical compound capable of dilating blood vessels and improving circulation.

For people who have already suffered from cardiac arrest or heart disease, including having a previous heart attack, vitamin B3 niacin can help to lower the risk of a reoccurrence taking place second one. In addition, niacin is an FDA-approved treatment for pellagra, a rare condition that develops from niacin deficiency.

Vitamin B3 niacin may be helpful for treating diabetes because of the role it plays in balancing blood sugar levels. It’s believed that vitamin B3 in the form of niacinamide can help improve the efficiency of certain oral drug treatments that are used to control diabetes.

Most diabetic patients are able to effectively control blood glucose levels better with the help of niacin, and can also lower their risk of high blood cholesterol and heart disease which is commonly seen in patients with diabetes.

Lowering “bad” cholesterol LDL levels is one of the first priorities in treating diabetic patients, and niacin is a proven method for doing so.

Some people use niacin or niacinamide for treating acne, especially severe cases of acne that can be very inflamed and painful (called inflammatory acne vulgaris).

Vitamin B3 in the form of niacinamide is prescribed as a natural treatment for healthy  skin and clearing acne when applied to the skin topically, and other people choose to take niacin or B vitamin complex supplements to help their symptoms.

Because niacin helps to reduce skin inflammation, flare ups, irritation, redness, and more, it is also used for treating skin conditions called bullous pemphigoid and granuloma annulare. These are two inflammation-caused skin diseases that involve blistering of the skin which can be very painful and cause infection.

Studies have shown that vitamin B3 niacin can help protect against Alzheimer’s Disease and other age related brain disorders that result in cognitive decline.

Additionally, Vitamin B3 niacin has been correlated with a decreased risk for many problems regarding poor brain function or loss of age-related thinking skills, including memory loss, migraine headaches, chronic brain syndrome, depression, motion sickness, insomnia, and even alcohol dependence. Niacin or niacinamide is also used for treating and preventing schizophrenia and hallucinations. Studies also show correlations between increased niacin intake and lower risks for attention deficit-hyperactivity disorder (ADHD).

6. Helps with Joint Mobility and to Treat Arthritis

Some research shows that Vitamin B3 in the form of niacinamide can be effective in increasing joint mobility. Studies correlate niacin intake with lower levels of joint pain, enhanced muscle strength, and fewer symptoms associated with muscle or joint fatigue.

Prescribed high doses of niacinamide has been seen in studies to improve flexibility and reduce swelling, allowing some people who take niacinamide to be able to cut down on standard painkillers or medications for arthritis.

As a treatment for osteoarthritis or bone and joint pain, niacin is normally prescribed in high doses for its anti-inflammatory effects. Reducing inflammation helps to lower the occurrence of symptoms of arthritis and to rebuild the joint cartilage that is crucial to mobility and strength.

7. Treats Pellagra, a Disease Caused by Low B Vitamin Levels

A vitamin B3 niacin deficiency is attributed to causing the disease called pellagra, which is usually seen in poverty stricken areas or in those with alcoholism. Pellagra symptoms include weak muscles, digestive problems, and skin inflammation and irritation.

People who pellagra usually have very low levels of niacin and other B vitamins, which contribute to the disease, but other causes include problems with protein metabolism and the inability to convert certain amino acids. When vitamin B3 levels are not restored, someone with pellagra can die within several years due to the deficiency.

Nicotinic acid deficiency results most often from malnutrition as well as with chronic alcoholism. Niacin is given to patients in third world countries who experience poverty and malnutrition, as well as those who are battling symptoms of alcoholism including nervousness, irritability, insomnia, and loss of consciousness.

The common treatment for pellagra is to prescribe high levels of the type of vitamin B3 called nicotinamide, which has the same vitamin function as niacin but is slightly different in terms of absorption and side effects.

Impotence, also called erectile dysfunction, is the inability for a man to sustain an erection. This can interfere with the ability to have satisfying sexual intercourse and may be partially due to low blood flow and bad circulation, in addition to other factors like stress, fatigue, and illness.

Vitamin B3 has been shown to assist with preventing nicotinamide adenine dinucleotide (NAD) defects. NAD molecules are crucial for energy storage and DNA synthesis in cells, so increasing B3 levels in pregnant women could lower birth defect rates overall.

Despite the findings in the study, more human studies are required before vitamin B3/niacin is prescribed by doctors. “Researchers need to learn more about how pregnancy influences NAD levels in general, and what a healthy level is.” 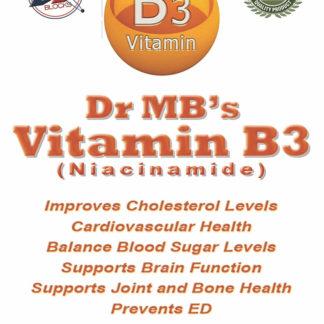