“Technically, lithium is not a drug but a mineral, similar to salt.”

“Lithium is an essential micronutrient… It is present in all organs and tissues in the body. It has similar chemical properties to that of calcium and magnesium.”

“Lithium has demonstrated remarkable benefit in the treatments of Alzheimer’s, Type II Diabetes, Shock, Inflammation, Schizophrenia, and many metabolic disorders within the body”

Unlike other forms of Lithium, “Lithium Orotate” is able to avoid any horrible side-effects, while still providing the powerful neuroprotective effects of Lithium. Lithium orotate can be regarded as being nearly 1500% more bioavailable than lithium carbonate.

The big difference is in bioavailability. (Bioavailability is the degree to which, or the rate at which, any supplement or substance is absorbed or becomes available at the targeted place in the body.

The Health Benefits of Lithium

Chronic lithium treatment was found to robustly reduce glutamate-induced excitotoxicity mediated by N-methyl-D-asparatate (NMDA) receptors. This effect was at least partly due to lithium’s ability to inhibit the influx of calcium, which mediates NMDA receptor activity.

Among HSPs, HSP70 exerts a wide variety of neuroprotective effects against apoptosis. These effects are mediated by inhibition of GSK-3.

Chronic lithium treatment also induces the production of Bcl-2, a protein in the frontal cortex that protects cells from apoptosis.

BDNF is a major neurotrophin essential for cognitive development, synaptic plasticity, and neuronal survival with anti-depressants and anti-anxiety effects.

This is likely a result of inhibition of GSK-3.

NGF and GDNF help increase neuronal survival and plasticity (the ability to regenerate and form new connections) of dopaminergic, cholinergic, and serotonergic neurons in the central nervous system.

Lithium treatment increases the production of VEGF, which promotes cell growth and remodeling of the blood vessels after stroke.

By increasing VEGF , lithium treatment can help people recover more quickly from a stroke or a heart attack.

The likely mechanism is by inhibiting GSK-3.

Autophagy or “cellular self-eating” is when the cells degrade and recycle cellular components to reuse the raw materials.

It is considered anti-aging, cancer-preventing, and important for neuronal function and survival.

Because lithium induces autophagy, it may be particularly helpful for neurodegenerative disorders – Alzheimer’s, Parkinson’s, ALS, and Huntington’s because these disorders are, in part, characterized by the accumulation of, misfolded disease-causing proteins.

Lithium was found to stimulate progenitor and stem cells in cultured brain hippocampal neurons (neurons from the memory center). In addition, lithium prevents the loss of proliferation induced by glutamate or cortisol (glucocorticoids). Long-term lithium treatment promotes the conversion of these progenitor cells into neurons.

It also increases neurogenesis in the subventricular zone, the only other place except for the hippocampus (memory center) that it’s been found to occur, causing a sustained increase in gray matter volume in patients.

Lithium increases N-acetyl aspartate (NAA) , which may be a marker of creativity and is correlated with IQ scores.

One probable effect is more efficient communication between two sides of the brain, which enhances intellectual performance.

Chronic lithium treatment increases long-term potentiation (LTP) in neurons of the hippocampus, which makes the nerve cells more efficient, and thus helps with learning and memory.

7) Lithium Can Calm and Stabilise Mood

Lithium is known to have a calming and mood-stabilizing effect in people as well, and is used to treat depression, bipolar disorder, and schizophrenia.

Lithium carbonate is the drug of choice for control of manic-depressive illness, reducing manic attacks.

It was also shown to be effective for aggressive behavior in people with attention-deficit hyperactivity disorder (ADHD).

Lithium increases CCK in the brain and this is part of the mechanism by which lithium prevents mania in bipolar.

Lithium is one of the best-studied strategies for treatment-resistant depression.

Lithium increases serotonin 5-HT1A postsynaptic sensitivity, which is in part responsible for its anti-depressant activity.

9) Lithium May Be a Potential Treatment for Huntington’s Disease

Lithium decreases excessive NMDA receptor function, which could potentially counteract increased activation of NMDA receptors that occurs in the brain of patients with Huntington’s disease.

These effects are dependent on p38 MAPK.

By inhibiting GSK-3, lithium is beneficial in animal models of autoimmune conditions.

However, studies indicate that under certain experimental conditions, lithium also has pro-inflammatory effects by increasing production of IL-4, IL-6, and TNF-α.

Lithium increases the production of IgG and IgM antibodies.

Lithium decreases the production and activity of prostanglandins, thus preventing its negative effect on the immune system.

Lithium decreased the frequency and duration of recurrent labial and genital herpes infections, and reduced the occurrence of common colds.

Lithium is associated with a decrease in the risk of bone fractures, and an increase in bone formation.

Lithium is the drug of choice for treating patients suffering from bipolar disorder, which is characterized by the presence of mania and depression.

It helps entrain our circadian rhythm more quickly in response to light and darkness.

Lithium may improve mitochondrial function by increasing the turnover of dysfunctional mitochondria.

Researchers have found a positive correlation between lifespan and lithium levels in drinking water. There was a decreased risk for all causes of death in Japanese neighborhoods with higher lithium levels.

This was also the case in worms. Long-term low-dose exposure to lithium may exert anti-aging capabilities, decreasing mortality in evolutionary distinct species.

The improvements in health were accompanied by improved mitochondrial function.

In a small study involving 3 patients, lithium had a better outcome than haloperidol, a commonly prescribed drug for Tourette’s. Patients who were taking lithium experienced a significant decrease in the number of tics and involuntary vocal sounds. Patients experienced no side effects, and were symptom free months later.

17) Lithium May Help with Tardive Dyskinesia

Tardive dyskinesia is a neurological disorder characterized by involuntary, sudden, and jerky movements of the face and/or body, caused by the long-term use of antipsychotic drugs.

It decreased agitation and aggression, and improved involuntary movements.

However, 2 large studies failed to report consistent effects of lithium on tardive dyskinesia.

Obsessive-compulsive disorder (OCD) is a mental disorder characterized by obsessive thoughts and behaviors.

Lithium supplementation is associated with a decrease in symptoms of OCD that are resistant to standard therapy.

Compulsive and pathological gamblers also had a good response to lithium supplementation, possibly by regulating dopamine imbalances in the brain.

Lithium may reduce the severity of both chronic and episodic cluster headaches.

Lithium carbonate given before sleep helped with “alarm clock headache” (a headache that affects the elderly, waking them from sleep at the same time of night).

20) Lithium May Be Effective in Anorexia Nervosa

Patients suffering from anorexia nervosa for many years were treated successfully with lithium carbonate.

One patient gained 12 kg and the other 9 kg within 6 weeks, and the weight gain was maintained for a year with lithium therapy.

21) Lithium May Be Effective for Treating Alcoholism

Lithium orotate is useful in the treatment of alcoholism.

In a study of 42 alcoholic patients, lithium was safely tolerated, with minor side effects, such as muscle weakness, loss of appetite, or mild apathy.

Patients treated with lithium were much less likely to be re-hospitalized for alcoholism rehabilitation during the 18-month followup.

The effect of lithium on seizure disorders is still controversial.

Some epileptic patients show a statistically significant decrease in seizure frequency as well as improved behavior when treated with lithium.

However, a few epileptic patients experienced an increased number of seizures while on lithium.

Meniere’s disease is a disorder of the ear that causes severe dizziness, ringing in the ears, hearing loss, and a feeling of fullness in the ear.

However, a study with patients given 6 months of lithium and 6 months of placebo showed no difference between the 2 treatments.

Be the first to review “Dr MB’s Lithium Orotate 5mg” 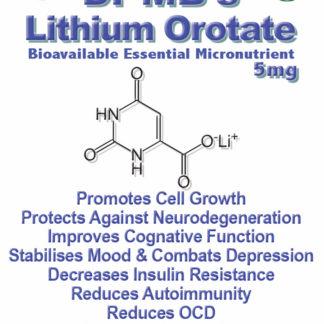