Vitamin B12 is one of the very important Vitamins and has not been given its due status thus causing a Vitamin B12 deficiency in Society.

A vitamin B12 deficiency is thought to be one of the leading nutrient deficiencies in the world, with a 2004 study showing that it’s a major health concern in many parts of the world, including the U.S, India, Mexico, Central America, South America and certain areas in Africa.

Because of its wide-reaching roles within the body, a vitamin B12 deficiency can show up in many different negative symptoms, many of which are very noticeable, such as potential chronic fatigue, mood disorders like depression, and chronic stress or feeling run down.

There are more precise screening options available to detect a deficiency, but these are usually not given to patients unless they have a known case of anemia or heart disease-related symptoms. So if you suspect you might have a deficiency but your initial blood test shows that your levels are normal, you may want to talk with your doctor about performing secondary tests, especially those that check for high homocysteine levels.

Symptoms of a vitamin B12 deficiency can include:

Who is most at risk for having a vitamin B12 deficiency? Elderly people who tend to have impaired digestion are one of the most susceptible populations. This is because older people tend to produce less stomach acid that is needed to convert vitamin B12 properly.

Vitamin B12 benefits your metabolism because it’s needed to convert carbohydrates into useable glucose in the body. Glucose from carbohydrate foods is used as a form of energy, so this is the reason why people with vitamin B12 deficiencies often experience fatigue. Vitamin B12 is also needed for neurotransmitter signaling that helps your muscles contract and gives you energy to go about your day without feeling tired and run down.

A vitamin B12 deficiency may cause various neurologic and psychiatric disturbances. Because of its role in nerve health and neurotransmitter signaling, vitamin B12 benefits cognitive function and is used to lower the risk of neurodegenerative diseases, including Alzheimer’s disease and dementia.

3. Boosts Mood and Helps the Nervous System to Properly Function

One of the most researched vitamin B12 benefits is its ability to help in healthy regulation of the nervous system, including reducing such mood disorders as depression and anxiety. Vitamin B12, along with folate, is needed as a major determinant of one-carbon metabolism, which produces the compound called SAM (S-adenosyl methionine). SAM is crucial for neurological function, dealing with stress and mood regulation.

Vitamin B12 is needed for concentration and cognitive processes, such as learning, so a vitamin B12 deficiency can result in difficulty focusing and an increased risk for attention disorders.

Vitamin B12 benefits cardiovascular health in several ways, which is important considering the fact that heart disease is currently the number one cause of death worldwide. Vitamin B12 helps to reduce elevated homocysteine levels, which is now considered a major risk factor for heart disease. Homocysteine is an amino acid and its levels in the blood are influenced by blood levels of B-complex vitamins, including vitamin B12.

Vitamin B12 helps to protect against heart disease like a heart attack or stroke by lowering high homocysteine levels in the blood. There is also some evidence that B12 can help control high cholesterol and high blood pressure levels. B vitamins are also able to control atherosclerotic diseases, in which someone experiences a dangerous build-up of plaque in the arteries.

5. Needed for Healthy Skin and Hair

Vitamin B12 is essential for healthy skin, hair and nails because it plays a major part in cell reproduction. Vitamin B12 benefits skin health by reducing redness, dryness, inflammation and acne blemishes — and can be applied to the skin for psoriasis and eczema. It can also reduce hair breakage and help nails to become stronger.

Due to its role in helping with digestive enzyme production, vitamin B12 is needed to support a healthy metabolism and the breakdown of foods within the stomach. One of the ways that vitamin B12 benefits digestion? It helps foster healthy bacteria within the gut environment. The elimination of harmful bacteria in the digestive tract — and simultaneously the presence of beneficial bacteria — is what prevents digestive disorders like inflammatory bowel disease (IBS) or Candida.

7. Needed for a Healthy Pregnancy

Vitamin B12 is needed to create nucleic acid, or DNA — the basic genetic material that’s used to create the entire body. Therefore, vitamin B12 is not only a key nutrient for growth and development, but a vital component of a healthy pregnancy. Vitamin B12 also interacts with folate in the body, so it may help lower the risk of birth defects, such as neural tube defects.

Vitamin B12 supplementation is now being studied as a way to help lower the risk of certain kinds of cancers, especially when taken with folate. Some preliminary research shows that vitamin B12 benefits the immune system enough to potentially help prevent cancer, including cervical, prostate and colon cancers.

Vitamin B12 is needed to help produce a healthy level of red blood cells. It helps prevent a type of anemia called megaloblastic anemia, which results in symptoms like chronic fatigue and weakness. 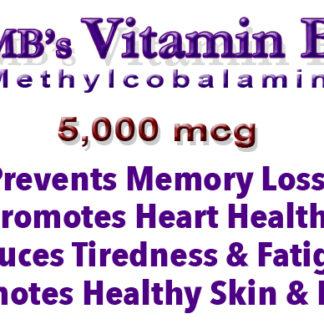