What Are Horse Chestnuts?

First of all, horse chestnuts aren’t related to chestnuts at all; they’re a totally different family of trees and shrubs known as Hippocastanaceae. While 15 recognised species exist, the European horse chestnut (Aesculus hippocastanum) is most commonly the one you’ll find used in supplemental and herbal medicine.

On the tree, horse chestnuts are encased in a spiky, greenish outer layer, and fall to the ground as the shiny, brown fruit once mistaken for a variety of chestnut. While these used to be fed to horses as stimulants and to help keep coats shiny, horse chestnuts are actually mildly poisonous to most animals except for deer and wild boar, which can break down the otherwise toxic compounds they contain.

Because of the glycosides and saponins found in horse chestnuts, they aren’t fit for humans to eat. However, the non-toxic parts of this tree and plant are what we use as a dietary supplement, and what was tested in the studies listed above.

Chronic Venous Insufficiency, or CVI, is also known as post-thrombotic syndrome or phlebitis. This condition is characterised by non-functioning valves in your veins (commonly in the legs and sometimes arms), which causes blood to pool in the limbs and an increase in internal pressure within the veins.

CVI is actually a very common affliction, affecting up to as many as 40 percent of people in the U.S. It’s more common for women, particularly after multiple pregnancies, and in middle-aged and older adults. Varicose veins and blood clots (deep vein thrombosis) are risk factors for developing CVI.

Conventional medical treatment of chronic venous insufficiency typically consists of compression treatment, which many patients don’t like due to the discomfort involved.

Two Cochrane reviews have been conducted to examine the effectiveness of horse chestnut on CVI and found that a significant number of randomised controlled trials (RCTs, heralded as the “gold standard” of scientific research) have suggested horse chestnut extract to be effective and safe for short-term treatment of CVI, while the reviewers caution that larger and more definitive trials must be conducted.

Some sources have also found that using butcher’s broom alongside horse chestnut extract in a cream is a useful treatment for varicose veins, the precursor to CVI.

2. Could Cause Cell Death in Certain Cancers

When cancer research is conducted on a particular substance, scientists begin by observing the effect of that substance on specific types of cancer cells in a lab. If the substance has a significant impact in causing the death of those cancer cells, future research may be warranted to see if it is a potential cancer treatment.

In a laboratory setting, horse chestnut extract has shown cancer-fighting effects on cells related to leukemia, cervical cancer and breast cancer. The most drastic of these were Jurkat cells, used to test a type of cancer known as acute T-cell leukemia, in which the lab tests found a cell death rate of nearly 94 percent.

Extract of horse chestnut contains some incredible antioxidants, which can help your body to fight free radical damage and more effectively fight disease. Studies have discovered both quercetin and kaempferol glycosides in horse chestnut, two antioxidants praised for their intense disease-fighting capabilities.

4. May Increase Effects of Prebiotics

A lot of us know that good probiotic foods can aid in digestion and gut health, but did you know that by pairing those with prebiotics, you’ll gain even more digestive benefits? Prebiotics are a type of non-digestible fiber compound that are fermented by the gut microflora in the colon.

In 2011, a study was conducted using rats to find the efficacy of using horse chestnut extract and flaxseed oil to improve the effect of probiotics. Both of these natural substances made prebiotics more effective. Scientists conducting the study point out that prebiotics are useful agents to help prevent and treat colon cancer.

Another benefit of horse chestnut that’s been a feature of preliminary research is its ability to help wounds heal. While no human studies have yet been conducted, a 2006 lab study found that horse chestnut extract can help induce contraction forces in fibroblasts, cells integral to the wound healing process. When these fibroblasts contract, they potentially induce faster wound healing.

Due to the rate at which male infertility is increasing, it’s become more important than ever to understand ways to support and maintain healthy sperm counts.

Supplements of horse chestnut contain an ingredient called escin — not to be confused with the poisonous esculin found in raw horse chestnuts. Possibly through the same mechanisms with which horse chestnut positively impacts chronic venous insufficiency, escin seems to safely increase count and quality of sperm in men with varicocele-associated infertility, according to a 2010 research study. 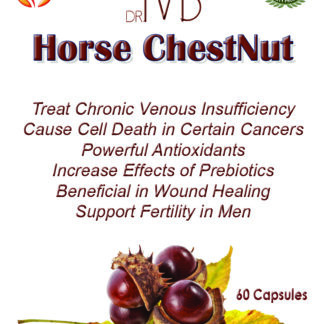