Rhodiola Rosea, also known as “golden root,” is an adaptogenic herb with tremendous fat-burning, energy-enhancing and brain-boosting power. Adaptogens including rhodiola are a group of plants that can help your body adapt to physical, chemical, and environmental stress. Rhodiola is one of the most effective in this family, due to containing active compounds like rosoavin that have the ability to help balance the stress hormone, cortisol.

This unique herb that is a member of the Rhodiola genera in the Crassulaceae plant family grows at high altitudes in the arctic areas of Asia and Eastern Europe. Rhodiola Rosea has been a part of traditional medicine systems practiced across the world, especially in parts of Europe, Asia and Russia, for many centuries. Historically, rhodiola has a long history of use in Traditional Chinese Medicine, especially for improving stamina and reducing stress. The Vikings also used rhodiola to enhance physical strength, while the Sherpa people used it to climb at high altitudes, even to conquer Mt. Everest.

The Russians have studied Rhodiola benefits extensively over the past 70 years, mostly for improving work performance and endurance while fighting insomnia, fatigue, anxiety and depression. It has also been used to cleanse the body, fight cancer and help treat tuberculosis.

What Is Rhodiola Rosea?

Rhodiola rosea is a stress-busting supplement that by goes by several names, including arctic root, roseroot, king’s crown and golden root. What does rhodiola do to the body to help make it more capable of dealing with stress?

As an “ergogenic aid” and an adaptogen – or a “natural herbal product that is non-toxic in normal doses, that produces a non-specific response, and that has a normalising physiologic influence” –  rhodiola is very helpful for improving both physical and mental energy and for fighting the negative effects of stress. It helps body adapt to stress by decreasing or preventing hormonal changes tied to prolonged stress. Research suggests that some of the ways it does this is by acting on beta-endorphins and opioid neuropeptides to enhance stress tolerance and by positively affecting other stress adaptation factors.

Rhodiola has been proven to have at least four major health benefits. The top rhodiola uses include:

Studies have found that Rhodiola Rosea contains more than 40 kinds of chemical compounds. Active constituents found within rhodiola that are responsible for its pharmacological effects include Rosavin and Salidroside. Rosavin is the only constituent unique to R. Rosea within the Rhodiola plant family, while Salidroside is common to most other Rhodiola species.

Rosavin is found in higher concentrations than Salidrosides, with approximately a 3:1 ratio within R. Rosea. In few studies it’s been found that Rosavin contributes to Rhodiola’s benefits by having antidepressant-like, adaptogenic, anxiolytic-like and stimulating effects.

Be the first to review “Dr MB’s Rhodiola Rosea Extract 15:1” 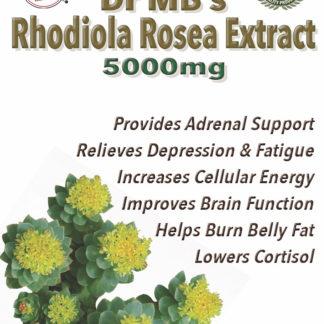