This NEW, Boswellia 8000mg is the strongest available in the world and highly potent specially made for those suffering with Cancer and Inflammatory diseases. Made in the UK.

This 20:1 Extract gives an equivalent of 8000mg in each capsule.

Cancer touches all of us in some form or fashion, whether it’s a family member, friend, co-worker or even ourselves who get diagnosed with some type of cancer. And while there is no cure for cancer, what if I told you there was a substance that potentially could help us fight cancer? Enter boswellia.

Because it may help turn off reactions of the immune system that drive up inflammation and swelling, boswellia is a potential natural treatment for cancer , capable of helping to fight pain in addition to inflammation. Boswellia serrata extract is so powerful that today it’s considered comparable to NSAID pain relievers (the leading type of chemical anti-inflammatory medications).

However, unlike over-the-counter or prescription medications that come along with all sorts of side effects, boswellia extract has been used safely and without complications for thousands of years. The chemical structure of boswellic acids closely resemble those of steroids — however their actions are different and do much more than mask symptoms.

Sound too good to be true? Let’s take a look at how boswellia can help curb your pain, clear up respiratory or sinus infections fast, improve inflammatory bowel disease and even potentially protect you from cancer. . . . . .

Among the valuable boswellia tree extracts that researchers have identified, several stand out as being most beneficial, including terpenes and boswellic acids, which are strongly anti-inflammatory and protective over healthy cells. Terpenes are strong-smelling chemicals found in certain plants, including some we associate with having antioxidant abilities, such as eucalyptus, basil, peppermint and citrus trees.

Terpenes play a vital role in protecting the plants that contain them, since their strong aroma can fight off insect predators, defend plants from environmental stresses and act as building blocks for important chemical processes. In the human body, terpenes can do the same thing, lowering free radical damage and prolonging health.

Other chemical compounds have been identified in boswellia that naturally reduce the inflammatory response by controlling T-lymphocytes, especially one called AKBA (3-O-acetyl-11-keto-beta-boswellic acid). Although it works similarly to NSAID pain relievers, AKBA’s exact mechanisms of action are very different because they target different inflammatory enzymes. Because they’re better able to preserve the integrity of the stomach and gut lining, boswellia extracts cause less side effects and pose less risk for toxicity compared to NSAIDs.

AKBA helps fight pain thanks in part to its ability to inhibit an enzyme called 5-LOX (5-lipoxygenase) and therefore shuts down mechanisms of leukotrienes, which are inflammatory mediators produced by the process of oxidation (specifically of arachidonic acid). AKBA has shown to be effective in helping to fight against a large number of inflammatory diseases, such as arthritis, bronchial asthma, chronic colitis, ulcerative colitis, Crohn’s disease and cancer.

Another active component of boswellia is called incensole acetate, which has similar powers over lowering inflammatory reactions, especially those that target the brain and speed up cognitive decline. Studies show that incensole acetate is protective over neurons, helps fight the formation of tumors and has mood-enhancing benefits, making it a potential natural antidepressant and anti-anxiety compound.

A study published in the Natural Medicines Comprehensive Database showed that boswellia serrata extract can help reduce pain, swelling and trouble moving in people with arthritis or osteoarthritis (a common, chronic, progressive, skeletal, degenerative disorder, which commonly affects the knee joint) and other forms of inflamed joints. Some experienced a significant reduction in joint pain by up to 32 percent to 65 percent, which is comparable to prescription medications, showcasing boswellia’s ability as a potential natural arthritis treatment.

Another study published in the Journal of Phytotherapy and Phytopharmacology found that boswellia serrata assisted in treating osteoarthritis symptoms such as knee pain, knee jerking and pain while walking significantly better than treatment with a placebo. Researchers concluded that the anti-inflammatory, anti-arthritic and analgesic activities of boswellia make it a promising treatment for decreasing knee pain, increasing knee flexion and increasing walking distances in those prone to frequent swelling in the knee joints.

Frankincense oil, which is formed by purifying the resin taken from the trunk of the boswellia tree, has been used for thousands of years medicinally, as well in religious and cultural ceremonies. Today, research tell us that frankincense essential oil is strongly tied to cancer prevention. Frankincense is taken by many people around the world with no known side effects. It effectively helps target cancer cells while preserving healthy cells, which is why it’s used in conjunction with traditional cancer treatments by many holistic practitioners.

Research shows a link between AKBA and protection against brain, breast, colon, pancreatic, prostate and stomach cancers. The potential cancer-killing properties of boswellia extracts and frankincense oil are in part due to how they influence our genes to promote healing, plus how they curb serious side effects of cancer treatments.

One of the most challenging and devastating things about battling cancer is suffering through the life-threatening and painful side effects that treatments like chemotherapy and radiation often cause. However boswellia extracts, such as those derived from the species boswellia carteri, shows promise for fighting these complications.

4. Speeds Up Healing From Infections

Boswellia is capable of lowering severity of infections of the respiratory or sinus tracts, which means you can experience relief from coughing, colds, the flu or a sore throat faster. Indeed, it’s one of the best essential oils for sore throat pain. Research shows boswellia also helps prevent allergies and asthma, eliminates phlegm in the lungs and acts as an anti-inflammatory in the nasal passages, which makes it easier to breath.

In Traditional Chinese Medicine, frankincense has been used as a natural remedy for improving blood circulation, speeding up healing time and in relieving pain from a variety of bacterial or viral infections, such as colds or the flu, leprosy or gonorrhea. Studies also show that boswellia carteri and boswellia serrata extracts serve as a natural antiviral and can help treat strong and serious viruses, such as the flu or those caused by insect bites. (

One of the oldest uses of frankincense oil and boswellia is treating a variety of autoimmune ailments, especially common inflammatory diseases including asthma, arthritis and chronic bowel diseases. Boswellia interferes with autoimmune disease development, since it seems to help control the production of immunoglobulins, or antibodies, which are made by the immune system to fight potential threats: bacteria, viruses, fungi and toxins.

The fact that boswellia serrata has inhibitory actions that decrease production of leukotrienes has received high attention by researchers who study chronic inflammatory diseases that are rooted in increased leukotriene activity. As one study published in the International Journal of Phytotherapy and Phytopharmacology puts it,

At the end of the cascade of events in the cellular immune system, as far as it directs to various tissues of the body — i.e. autoimmune diseases — formation of oxygen radicals and proteases play an important destructive role … it’s not surprising that positive effects of boswellia in some chronic inflammatory diseases including rheumatoid arthritis, bronchial asthma, osteoarthritis, ulcerative colitis and Crohn’s disease have been reported.

Your immune system constantly makes different types of antibodies to fight off various diseases (or “antigens“), but sometimes this process goes wrong and antibodies can actually be created that fight your very own bodily tissue, including healthy tissue that forms your organs. When this takes place, autoimmune disease occurs, which can affect nearly every system within the body.

Many studies have shown that boswellia extracts help treat inflammatory bowel diseases (IBD) including ulcerative colitis, Crohn’s disease and collagenous colitis. IBS is a term for a group of intestinal disorders that cause prolonged inflammation of the digestive tract, especially the bowel lining that’s important for normal nutrient absorption and waste elimination. IBS can also affect other parts of the digestive system, including the mouth, esophagus, stomach, and small and large intestines. Research shows that leukotrienes play a large role in igniting inflammation that disrupts normal bowel function.

Boswellia may help patients enter remission from IBS since it reduces inflammation/swelling associated with bowel diseases, restores normal bowel cell structures, improves stool properties significantly and helps heal openings in the bowel wall. One study published in the European Journal of Medical Research found that 350 milligrams of boswellia serrata extract given three times daily for six weeks resulted in patients experiencing improvements in all parameters tested. A whopping 82 percent of IBD patients went into remission, which was even more than the percentage of patients who were using the standard prescription for IBD called sulfasalazine!

Similarly, supplementation with boswellia has been shown to be effective for facilitating remission in patients with collagenous colitis, another type of IBD that causes abdominal pain, rectal bleeding, diarrhea and lots of discomfort. In a study done by the Department of Medicine at Medical College Jammu in India, boswellic acids were found to inhibit the enzyme 5-lipoxygenase, which is a major contributor to the disease. Twenty patients were given boswellia serrata (900 milligrams daily divided in three doses for six weeks), and at the end of the trial, 18 out of 20 patients showed an improvement in one or more of the parameters tested while 14 out of 20 went into remission. 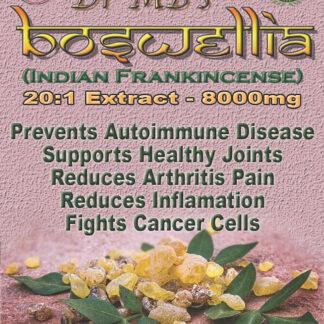