In cultivating MATCHA, the plant is shade-grown for a short period before being harvested.  After its harvesting the leaves of the plants are ground to a fine powder, the results is a Highly Nutritious powder.

Unlike other types of tea, Matcha contains the entire tea leaves, providing a more concentrated source of nutrients. It also has a strong, distinct flavor, which many compare to spinach or wheat grass.

The secret behind matcha’s super strength is found in its polyphenol compounds called catechins, which are a type of antioxidant found in superfoods like green tea, cocoa and apples.

Valued for being more catechin-dense than most foods, the health benefits of matcha generally arrive for those who regularly drink it. Potential benefits range from improved heart health to lower blood sugar levels, increased weight loss and beyond.

Research has shown that green tea consumption could potentially reduce the risk of cancer. Some of the specific cancers that MATCHA has been shown to benefit include:

Several promising studies have found that matcha tea benefits your waistline and could help promote and sustain long-lasting weight loss.

For example, one study in the American Journal of Clinical Nutrition found that drinking a tea high in catechins for 12 weeks led to significant reductions in fat mass, BMI, body weight and waist circumference compared to a control group.

Similarly, a review out of the Netherlands reported that the catechins found in Matcha could help reduce body weight and maintain weight loss.

Other research has found that Matcha could increase metabolism and boost fat-burning to help enhance long-term weight loss as well.

Clinical tests suggest that matcha can help speed up muscle recovery in athletes whose focus is high-intensity workouts, like burst training.

It has also been shown to reverse cellular damage caused by oxidative stress, which could help prevent damage to the muscles and tissues.

According to a paper published by Harvard Medical School, Match tea is one of the best food sources of a group of antioxidants known as catechins.

Catechins are thought to be even more powerful than both vitamins C and E in stopping oxidative damage to the cells. Antioxidants like catechins play a key role in health and disease, with studies showing that they could help protect against chronic conditions like heart disease, diabetes and cancer.

Research also shows that Matcha is significantly higher in catechins than other types of tea, such as green tea.

5. High Levels of L-Theanine for an Alert Calm

Matcha is said to induce a feeling of “alert calm,” thanks to the powerful combination of L-theanine and caffeine.

L-theanine is an amino acid found naturally in teas from the Camellia sinensis plant. By drinking Matcha Green tea, you can increase levels of L-theanine and promote alpha waves, which lead to a state of relaxed alertness.

L-theanine also helps to increase levels of dopamine and GABA in the brain, which could benefit conditions like anxiety.

Due to the conditions in which it is grown, it’s estimated that Matcha green tea may contain up to five times as much L-theanine as regular green tea.

High in antioxidants and catechins, some studies show that green tea may help reduce the risk of heart problems.

In fact, one study in over 40,000 people found that those who drank more than five cups of Matcha tea daily had a 26 percent lower risk of death from heart attack or stroke compared to those who drank less than one cup of green tea daily.

Other studies have found that Matcha Green tea consumption could help lower cholesterol levels and reduce blood pressure to protect against heart disease.

Making a few healthy changes to your diet and lifestyle is one of the best ways to prevent type 2 diabetes, and some research suggests that adding Matcha to your routine may be especially beneficial.

For instance, one study published in the Annals of Internal Medicine found that consumption of Matcha tea was associated with a lower risk of developing diabetes after adjusting for age, sex, body mass index and other risk factors.

Another study published in the American Journal of Clinical Nutrition found that green tea consumption decreased blood sugar levels and improved long-term blood sugar control. Not only that, but Matcha green tea also led to a significant reduction in insulin levels as well.

Matcha’s rich green colour is the result of its high chlorophyll levels. Chlorophyll is a type of plant pigment responsible for the absorption of light in the process of photosynthesis, which creates energy.

The fact that Matcha is carefully shade-grown makes it significantly richer in chlorophyll compared to other teas.

In addition to giving Matcha its signature vibrant hue, chlorophyll also aids in detoxification and can help promote the elimination of unwanted toxins, chemicals and heavy metals from the body.

For this reason, consuming a daily cup of Matcha is an easy way to boost your intake of chlorophyll and  support your body’s natural ability to detoxify itself. 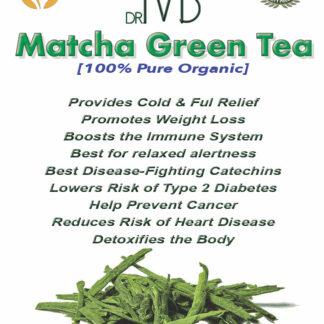