20:1 Extract giving an equivalent to 7600mg per capsule

What Is Pine Bark Extract?

Pine bark extract comes from the inner bark of the Pinus pinaster tree, most commonly found in Europe. A popular variety is the pinus maritime or the maritime pine that grows exclusively along the coast of southwest France.

This bark extract has been around for about 450 years. In 1534, a French ship led by the famous explorer Jacques Cartier became stranded in ice near Quebec, Canada. The crew fell extremely ill from scurvy, an extreme lack of vitamin C. Cartier’s crew crossed paths with a Quebec Indian who encouraged them to drink a tea made from pine bark and needles.

Four hundred years later, a French researcher named Jacques Masquelier did some studies to understand why this natural remedy was so effective. He learned about the seemingly omnipotent antioxidant within it and how those antioxidants increase the absorption of vitamin C.

Continued research showed that the pine bark contained flavonols and bioflavonoids, which hold tissue-repairing properties. Masquelier was easily able to create a pine bark extract from materials that were otherwise known as waste.

Pine bark extract has been studied with regard to its ability to help diabetic patients. A study was conducted by the Guang An Men Hospital of Chinese Medical Science Research Institute with 77 diabetes type II patients to determine if the extract of the French Maritime pine bark provided anti-diabetic effects. Patients were given 100 milligrams of Pine Bark Extract, for 12 weeks, with continued anti-diabetic treatment.

The effects of the pine bark extract showed significant lower levels of blood glucose and improved endothelial function when compared to placebo, concluding that supplementation with Pine Bark for treating conventional diabetes may be beneficial.

Ototoxicity is ear poisoning and can occur when exposed to certain drugs or chemicals, such as cisplatin, that damage the inner ear or the vestibulocochlear nerve. This nerve affects our balance and hearing by sending signals to the brain. This condition can be temporary or permanent — however, some studies have indicated that pine bark extract may help alleviate these symptoms due to its high presence of antioxidants.

Studies have been conducted to review the effects of pine bark extract on pseudomonas infectious wounds. These wounds occur most frequently in hospitals or in those with weakened immune systems, such as after surgery. However, healthy people are not immune and can also develop mild infections, in particular after being in improperly chlorinated hot tubs or swimming pools.

In one particular study published in Research in Pharmaceutical Sciences, researchers investigated the antibacterial activity of pine bark extract essential oil on staph infections, E. coli and pseudomonas infections. The antibacterial activity was assessed indicating that the essential oil of pine bark, specifically the proanthocyanidins, were effective against P. aeruginosa, significantly inhibiting its growth. Additionally, the results showed that the extract has significant “anti-pseudomonas activity,” making it a potential natural remedy and possible preventive measure for infections.

4. Protects the Skin from Ultraviolet Exposure

Who doesn’t want amazing skin? Pine bark extract may be the perfect treatment since it’s an antioxidant dynamo.

There is a seemingly growing problem with skin exposure to ultraviolet radiation and the confusion of how to get vitamin D from the sun while avoiding these skin-damaging rays. A review was conducted of French maritime pine bark extract.

The study provided clear evidence that Pine Bark Extract does, indeed, offer photoprotection — however, it came out even better than expected, showing that it may be used to reduce hyperpigmentation of human skin while improving the “skin barrier function and extracellular matrix homeostasis.”

If you knew you could resolve your erectile dysfunction and, therefore, naturally remedy impotence issues, wouldn’t you? Erectile dysfunction has increased over the past decade or two, creating a pathway for various medications to land on the shelves of numerous medicine cabinets. But, as you know, going for the natural approach can make a huge difference in overall health.

According to a Japanese study, the combination of Pine Bark and L-arginine may produce the results you’re looking for, making the bedroom a much happier place. Forty-seven Japanese men with mild erectile dysfunction were given supplementation L-arginine and French maritime pine bark extract over a period of time. The studies revealed that the sperm concentration greatly increased after about eight to 16 weeks of treatment, to include improved orgasmic function. No side effects were noted, unlike its synthetic counterpart.

As I mentioned, pine bark extract is superior when it comes to antioxidants. These antioxidants scavenge those damaging free radicals in an effort to eliminate them, ultimately preventing disease.

Studies were conducted in Turkey on subjects who underwent abdominal surgery to determine if the pine bark extract could help reduce the inflammation. They were given Pine Bark Extract for a period of 15 days. The outcome showed significant healing when compared to those subjects who were not given any drug or remedy, concluding that Pine Bark may be an effective remedy for healing of surgery-related lesions.

Pine bark extract has been studied regarding its relationship to exercise performance, oxidative stress and inflammation to body that has been imposed by exercise. Research indicates that Pine Bark provides an increase in endurance performance of trained athletes. It does this by improving the time it takes the body to reach a fatigued state through increased serum NAD+ levels. 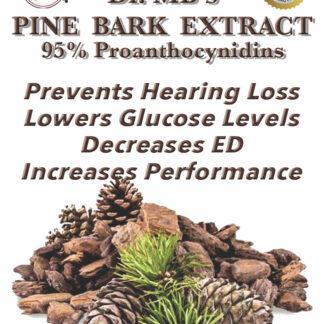