A Brain-Friendly Form of Choline for Mental Health

Choline is found in foods such as beef and chicken liver, egg yolk, soybeans, beef, milk, and peanuts. However, strict vegetarians, endurance athletes, people who drink a lot of alcohol, and those who follow low-fat/low-cholesterol diets may be at risk of choline deficiency.

GPC (alpha-glycerylphosphorylcholine), like phosphatidylserine, is an orthomolecular compound (found naturally in the brain), where it serves as an acetylcholine precursor. Acetylcholine is an essential neurotransmitter involved in memory, cognition, sleep, and neuromuscular control.

Acetylcholine decline coincides with advancing age, and is a hallmark of neurodegenerative disease.

GPC is believed to prevent and ameliorate dementia and memory and learning loss because it increases plasma levels of choline and therefore increases production of acetylcholine and phosphatidylcholine.

Be the first to review “Alpha GPC 500mg Capsules” 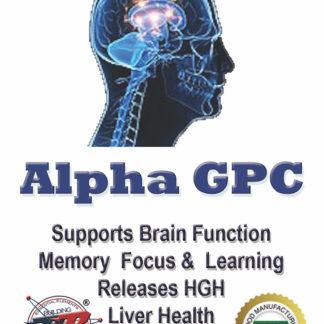