ORGANIC, uses hot water extraction to draw out bio-actives. Soil Association certified organic, grown without chemicals or pesticides. UK made to GMP standard with only the finest quality raw materials.

Mushrooms are Adaptogen herbs are a unique class of healing plants that promote hormone balance and protection the body from a wide variety of diseases, including those caused by excess stress. In addition to boosting immune function and combating stress, research shows that various adaptogens, such as Ashwagandha & Medicinal Mushrooms can:

The Mushrooms and their benefits . . .

What it’s good for: Chaga has anticancer and antitumor activity.

Where it grows: Chaga grows on birch trees and other hosts, especially in the Eastern United States, Alaska, Europe, and other parts of the northern hemisphere. Hobbs describes chaga as “a hard black, deeply cracked stalkless growth found on alder, birch, and elm.” Chaga looks as if it’s been burnt and can grow to lengths of four to five feet.

What it’s good for: A potent immune-boosting mushroom; has antitumor and antiviral properties; lowers blood pressure and cholesterol. Hobbs writes that shiitake is “used medically for any and all diseases involving depressed immune function, including cancer, AIDS, environmental allergies, candida infections, and frequent flu and colds.’’

What it’s good for: Reishi is useful for many ailments. It has immunostimulant properties, calms anxiety, and is used as a general tonic. It is anti-allergenic and antiviral, and is used for hepatitis and heart arrhythmias. Reishi can also be used as an antidote for poisonous mushrooms. Hobbs writes that the mushroom is “especially suitable as a calming herb for people with anxiety, sleeplessness, or nervousness accompanied by an adrenal weakness.”

What it’s good for: Maitake has been shown to inhibit tumor growth in several studies. It may also help reduce blood pressure and raise HDL (the so-called “good”) cholesterol.

Cordyceps has a long history as a tonic herb applied in both Chinese and Tibetan medicine. It grows at high-altitudes of over 3,800 meters above sea level in the mountainous Himalayas, where it is known as yarsa gumba. Yak herders of old, in a region known as Sikkim, noticed a correlation between their strong and prosperous cattle, and the presence of cordyceps. Folk healers in Sikkim use the fungi to treat a plethora of ailments including cancer, diabetes, asthma and erectile dysfunction. Modern scientific research is starting to confirm their intuitions with regard to the fungi’s healing properties. One of the most detailed and in-depth papers on the fungi was published by the Department of Pharmacology at the Sikkim Manipal Institute of Medical Sciences in India. Polysaccharides are once again a key healing ingredient in cordyceps. It also contains beneficial fatty acids, amino acids and sterols. In animal studies, cordyceps demonstrated anti-tumor, anti-diabetic, radio-protective and anti-platelet effects, as reported in detail by the Memorial Sloan Kettering Cancer Center. Another interesting and rather unique property of cordyceps is its proven ability to enhance exercise and athletic performance, and resistance to fatigue, as demonstrated by a study out of the University of California in Los Angeles.

What if there were one natural treatment that could restore brain function, regrow damaged nerves and reverse the progression of multiple sclerosis? There may be! Lion’s mane mushroom has been used medicinally in Asia for centuries, but for some reason it’s one of the best-kept secrets in the West. 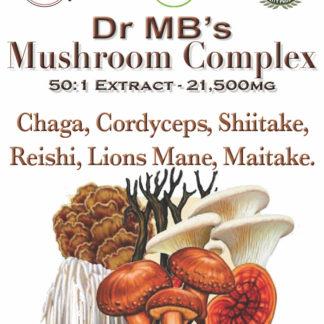