Triphala is most commonly known for its use as a gentle bowel tonic, being helpful in digestion, and supporting regular bowel movements. The combination of the three fruits has a synergistic effect to bolster many other systems as well. In addition to the GI tract, Ayurveda uses triphala to support healthy respiratory, cardiovascular, urinary, reproductive, and nervous systems. Triphala has also been shown to be a powerful antioxidant, protecting cells from the damaging effects of free radicals. The three fruits involved in making triphala are also known for their individual effects:

Natural laxatives like triphala tend to be gentler than over-the-counter laxatives, nourish the digestive tract and help produce regular bowel movements. Triphala can help to naturally cleanse the colon. Having regular bowel movements are important for removing bacteria, heavy metal detox and eliminating excess fatty acids from the body.

A colon cleanse can also impact the nervous system positively, which is why it might help symptoms like fatigue and anxiety. When it comes to the elimination process, amla supports intestinal repair, haritaki strengthens the intestinal muscles to contract more efficiently when the bowels need to move, and bibhitaki pulls the old mucus off the wall.

A 2011 study showed that a polyherbal formulation in powder form containing isabgol husk, senna extract and triphala extract was an effective, safe and non-habit-forming herbal laxative formulation for the management of constipation.  They attributed the positive effect on colitis to its abundant presence of flavonoids and high antioxidant activity.

Be the first to review “Dr MB’s Triphala Extract 5000mg” 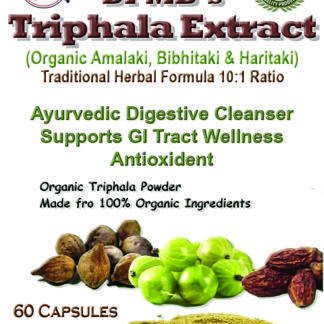