Read on to see why these two Vitamins could be the cure of many diseases . .

What is vitamin D?

Vitamin D is actually a hormone rather than a vitamin. The body makes most of the vitamin D it needs; only about 10% comes from our food. The action of sunlight on our skin produces a substance called cholecalciferol, which is converted by the liver to calcidiol. This is further converted in the kidneys by the enzyme 1α-hydroxylase to calcitriol, the active form of vitamin D. Calcidiol is considered a good indicator of vitamin D levels and is the form that is usually measured by doctors.

The active form of vitamin D is produced primarily by the kidneys, but there are also a number of other tissues in the body that activate vitamin D. Excess cholecalciferol and calcidiol made during the summer are stored in our fat for use during the winter. Vitamin D modifies the activity of bone cells and is important for the formation of new bone in children and adults. It also regulates calcium levels in the blood by helping the body to absorb calcium from food and by preventing calcium loss from the kidneys. Recently, the role of vitamin D as a potent regulator of other functions throughout the body has emerged, although we are only just beginning to fully understand what these are and the significance for our health.

How is vitamin D controlled?

What happens if I have too little vitamin D?

Vitamin D deficiency is common in the UK, probably due to lifestyle changes and increased concern about sun exposure. If you have too little vitamin D you are unable to maintain an adequate concentration of calcium in your blood for bone growth. This causes rickets in children and osteomalacia in adults. As the role of vitamin D as a regulator of other functions throughout the body has emerged, it has been suggested that a lack of vitamin D is linked to an inability to fight infections effectively; the development of diabetes; certain cancers; multiple sclerosis; depression; heart disease; high blood pressure; and stroke, although the direct relevance and mechanisms underlying these responses remain unknown.

What is Vitamin K2?

Vitamin K is a fat soluble vitamin that is important for blood clotting and that contributes to a healthy heart, bones and immune system.

Vitamin K2– (or menaquinone) is a more absorbable form of Vitamin K found in certain fermented foods and supplements is used by soft tissues and is helpful for bones, heart tissue and more.

Estimates are that over half of the adult population is deficient in Vitamin K.

While the effects of Vitamin K deficiency can show up in more serious problems like cardiovascular disease, bone loss and tooth decay, it can also manifest in smaller symptoms like easy bruising, heavy periods, or nosebleeds.

Those with digestive problems or with a history of antibiotic use are the most at risk for these problems.

So why is Vitamin K so important anyway?

Research has shown that Vitamin K2 is one of the most important nutrients for long-term bone health and that it is even more important than calcium.

K2 is needed to help calcium and other minerals bind into the bone matrix to strengthen bones (and not to stay in soft tissue where it can cause calcification in the wrong places).

In fact, studies have shown that Vitamin K is effective at not just stopping bone loss in people with osteoporosis but potentially reversing it as well. This same research found up to an 80% reduction in fractures in osteoporosis patients with K2 supplements.

I wrote before about how calcification of the arteries can occur when a person consumes too much calcium without the needed cofactors in the right ratios: Magnesium, Vitamin K2 and Vitamin D3.

The book Vitamin K and The Calcium Paradox details how Vitamin K is needed to usher calcium into bones and other necessary places in the body and keep it out of soft tissue, arteries and the heart. Magnesium is also important for this process and without the needed K2, D3 and magnesium, calcification is more likely.

With the drastic rise of heart disease in recent decades, Vitamin K is becoming an ever-important topic.

Oral health is vital for overall health and Vitamin K is important for oral health. In fact, Vitamin K was one of the vitamins that Dr. Weston A. Price found was vital for tooth remineralization and prevention of cavities.

I used it as part of my tooth remineralization process that helped me reverse several small cavities. (I recently confirmed that remineralization is possible in an interview with a dentist who specializes in this process- listen here)

This will be getting its own post soon, but the same action that makes Vitamin K beneficial for bone health may also make it helpful for those with varicose veins.

Human research is still in the early stages, but we know that Vitamin K is needed for the production of MGP (matrix GLA protein), which helps avoid calcification in the arteries. This same protein helps stop calcification in the veins as well since the calcium meant for the bones is ushered into the bones and does not accumulate in veins and arteries.

The preliminary study published in the Journal of Vascular Research found that Vitamin K2 was necessary in reversing the chemical change and avoiding or getting rid of varicose veins.

More research is needed, but since Vitamin K has so many other benefits, it might be worth trying for those who struggle with varicose veins.

There are several well-documented studies that show a correlation between higher Vitamin K consumption and lower risk of certain cancers:

Some fascinating new research showed that the same process that makes Vitamin K helpful for preventing calcification of the arteries and muscle tissue might also make it beneficial for protecting the brain against Alzheimers and other diseases.

In short, the theory is that Vitamin K helps prevent excess calcium in the body (including the brain), and this excess disregulated calcium in the brain accounts for some of the damage from Alzheimers.

Another study looked at the dietary intake of Vitamin K in patients with early Alzheimers and found that those diagnosed with Alzheimers had considerably less Vitamin K than those in the control group.

Of course, all of the above benefits show why it would logically have such an impact on mortality by reducing the risk of death from the main causes like atherosclerosis, osteoporosis, diabetes, and cancer, but it appears that there is a dose dependent correlation with Vitamin K intake.

8. Synthesis of Other Nutrients

I already mentioned how Vitamin K is needed for proper calcium synthesis (along with magnesium) but it is also needed in balance with Vitamin D3.

Vitamin D helps you absorb calcium, but K2 helps it actually end up in your bones and Magnesium helps make sure it gets there efficiently.

K2 is also promising for skin health and anti-aging. Just as it prevents the calcification of arteries, veins and soft tissue, it helps stop excess calcium in the elastin in the skin.

For this reason, K2 may help keep skin elastic and prevent wrinkles.

I believe that Vitamin K2 is an unspoken and vitally important nutrient and that widespread deficiency could be related to the rapid rise in health problems we see in modern society and adding to this the Vitamin D3 it becomes the ultimate supplement every human needs to take!! 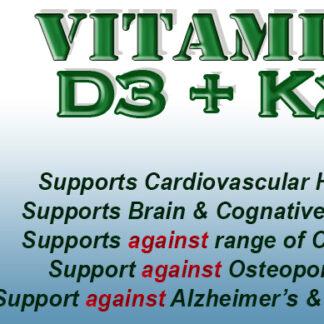