Slippery elm, also known as red elm, has been used as an herbal remedy in North America since the 19th century because it’s been shown to treat a number of digestive issues, including relieving constipation. What makes it so great? It contains mucilage, a substance that becomes a slick gel when mixed with water. This mucilage coats and soothes the mouth, throat, stomach and intestines, making it ideal for sore throat, cough, gastroesophageal reflux disease (GERD), Crohn’s disease, ulcerative colitis, irritable bowel syndrome (IBS), diverticulitis and diarrhea. Plus, it’s been even used to treat breast cancer!

These are just some of the slippery elm benefits. What else can this amazing tree bark do? Let’s take a look.

It also may help protect against ulcers and excess acidity in the body because it causes reflux stimulation of nerve endings in the gastrointestinal tract, and that reaction leads to increased mucus secretion. Not only does this help most people, but it can actually give much relief to your dog too!

Formula one was associated with a small but significant increase in bowel movement frequency. Subjects also experienced reductions in straining, abdominal pain, bloated stomach and global IBS symptoms during the treatment phase of the trial. Subjects who took formula two experienced a 20 percent increase in bowel movement frequency and significant reductions in straining, abdominal pain, bloating and global IBS symptom severity, as well as improvements in stool consistency.  Ultimately, both formulas showed improvements.

Likewise, it’s been shown to treat diarrhea as well, along with diverticulitis.

Since slippery elm has the ability to improve digestion, this process can aid in weight loss. A study performed at New York Chiropractic College used normal participants from the faculty, staff, students and community members to participate in a 21-day weight loss program. All participants received freshly prepared, mostly vegan meals at breakfast, lunch and dinner. They included 1,200 to 1,400 daily calories for the women and 1,600 to 1,800 daily calories for the men.

During week three, the cleanse supplementation was replaced with prebiotic and probiotic supplementation. In addition to detecting clinically meaningful reductions in weight, subjects were also seen as having low-density lipoprotein cholesterol.

Many plants contain phenolics, which are aromatic benzene ring compounds that produce one or more hydroxyl groups, mainly for protection against stress. This makes slippery elm a great stress reliever.

Though more studies need to be conducted, slippery elm, when combined with certain herbs such as burdock root, Indian rhubard and sheep sorrel, may improve conditions for women with breast cancer and improve depression, anxiety and fatigue. Because it has immune-boosting benefits and anti-inflammatory effects, it may help relieve pain associated with breast cancer, and it’s most common to find slippery elm in herbal tea mixtures and herbal dietary supplements.

5. Reduces Severity of Symptoms of Psoriasis

Slippery elm has been shown to help patients with psoriasis, which is a big deal given that there is no cure for psoriasis. Five case studies were evaluated of patients with psoriasis following a specific dietary regimen. Evaluation consisted of a study group of five patients, both men and women between the ages of 40–68, diagnosed with chronic plaque psoriasis.

The subjects were asked to follow a dietary protocol that included a diet of fresh fruits and vegetables, small amounts of protein from fish and fowl, fiber supplements, olive oil, and avoidance of red meat, processed foods and refined carbohydrates. They were also asked to consume saffron tea and slippery elm bark water daily. The five psoriasis cases, ranging from mild to severe at the study onset, improved on all measured outcomes over a six-month period, proving slippery elm makes a great addition to any psoriasis diet treatment.

These are just the few important benefits but the list does not end here.

Its important though what strength of this herb you are taking, especially when you want to see good positive results.

Be the first to review “Dr MB’s Slippery Elm Bark” 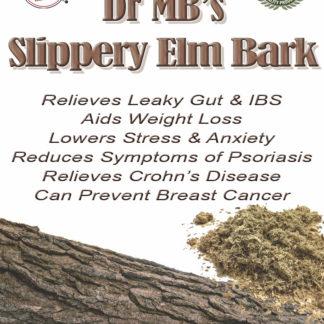