According to a 2015 article published in the journal Pythotherspy Research, “Willow bark extract has been used for thousands of years as an anti-inflammatory, antipyretic, and analgesic.” In other words, white willow bark benefits include lowering inflammatory responses that contribute to chronic diseases, fighting pain and reducing fevers.

Whether in extract or tea form, willow bark can provide relief to those suffering from back pain, recurring headaches, muscle pains, menstrual cramps, arthritis symptoms and more.

What Is White Willow Bark?

Salicin works in similar ways as acetylsalicylic acid, the active ingredient in aspirin. In fact, in the 1800s, salicin was used to develop aspirin.

Willow trees are members of the Salicaceae plant family and are native to Europe, Central Asia and Northern Africa.

Studies have been conducted, those that have suggest it can help treat conditions including:

1. Has Antioxidant and Anti-Inflammatory Effects

Dating all the way back to the time of Hippocrates, people have chewed on white willow bark to help naturally dull pain and inflammation. Today we know from studies that willow bark has the capability to reduce inflammation and oxidative stress and increase antioxidant activity, including glutathione.

In vitro studies have found that WWB’s pain-relieving effects are due to its ability to scavenge free radicals and down-regulate inflammatory mediators, including tumour necrosis factor-α and nuclear factor-kappa B.

It also seems to affect prostaglandin production, reducing inflammation that leads to pain like cramps and also fevers.

Some research has demonstrated that white willow bark can help people dealing with chronic joint pain and injuries.

Certain studies have shown that WWB extract can reduce osteoarthritis pain and back pain as well as certain prescriptions drugs.

According to a 2009 systematic review on the effectiveness of willow bark for musculoskeletal pain, several studies indicate a dose-dependent analgesic effect not inferior to rofecoxib (a nonsteroidal anti-inflammatory drug used to treat arthritis) among patients with low back pain.

One study published in the American Journal of Medicine involving nearly 200 people with low back pain found that supplementing with willow bark led to significant improvements in pain compared to those who received placebo.

Another randomized, placebo-controlled, double-blind clinical trial that included 78 adults with osteoarthritis found that those receiving willow bark extract showed a moderate analgesic effect in osteoarthritis and that WWB appeared to be well-tolerated.

A major benefit of using plant-derived extracts and herbs for pain such as arthritis is that most appear to cause less side effects compared to NSAIDs, including aspirin.

3. Defends Against Common Illnesses and Fevers

By supporting the immune system, providing antioxidants and reducing inflammation, WWB can be used to help get rid of a fever, treat the common cold, help manage symptoms of the flu and speed along recovery from other illnesses.

Increased defence against bacteria and viruses seems to be due to white willow’s polyphenols and flavonoid content, as well as other compounds. These antioxidants have been shown to have fever-reducing and antiseptic properties.

Willow bark can be especially helpful for fevers when combined with cooling herbs, such as wintergreen or peppermint, in essential oil form or tea.

Because it can provide natural pain relief, white willow bark extract is used by some athletes to help support their performance and recovery.

Anecdotal reports and a small number of studies suggest it has the ability to decrease muscle and joint pain and fight fatigue that interferes with physical capabilities. It’s also been widely used throughout history to help treat inflammatory conditions such as bursitis and tendinitis, as explained as Penn State Medical Center.

5. Used to Help With Weight Loss

Although research focused on its effects on weight loss is limited, some reports indicate that WWB may help promote fat loss among overweight or obese adults. It’s believed that willow bark’s anti-inflammatory activity can help support metabolic health.

It is unsafe when combined with risky weight loss supplements, such as Ephedra, which is banned in the United States due to reports of serious adverse effects.

6. Fight Headaches and Boost Your Mood

Some people claim that they experience benefits of white willow bark for reducing headaches, fatigue and anxiety. 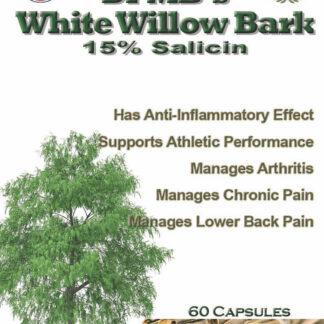