Do you love tomatoes? If not, after hearing about the incredible antioxidant capabilities of lycopene, you will.

Lycopene is cancer-preventative phytonutrient — an antioxidant with a laundry list of amazing benefits. It’s most commonly found in tomato nutrition, but you can consume it in a number of common fruits and veggies. It has some properties in common with beta-carotene, although they’re not identical.

As a pigment in food, lycopene is responsible for the red color of tomatoes, although not all red fruits and vegetables contain this antioxidant. It’s even registered as an official food coloring in the U.S. In fact, lycopene is not soluble in water and is responsible for staining a lot of cookware the orange color you often find after making spaghetti sauce.

While the staining may be tough to scrub clean, it’s worth the effort because this amazing phytonutrient has a host of impressive benefits. . . . . . . .

1. One of the Most Powerful Antioxidants in the World

Antioxidants are so important for many reasons, especially in a world where processed food has eliminated most of what gives your body the ability to prevent and fight disease. Lycopene is an antioxidant that might as well be worth its weight in gold for the incredible things from which it protects your body.

Do you ever wonder what kinds of pesticides are on the food that most people eat? Dichlorvos and atrazine are two common pesticides that are used in the US, UK and EU to protect produce from insects. They also both have toxic effects in the human body. Unfortunately, it’s unlikely that you can completely rid yourself of every bit of chemical exposure, although buying organic produce is a good start.

Fortunately, lycopene’s antioxidant capabilities can protect your body from the damage induced by pesticides. Studies show that it can protect your liver from common corruption by dichlorvos and also reverse or protect from destruction to your adrenal cortex by atrazine. And isn’t it fascinating that your adrenal cortex controls your stress response, and one of the most common pesticides used on food and other areas damages that part of your brain?

Another dangerous chemical that you’ve been exposed to before is monosodium glutamate (MSG). We’ve all heard of MSG, but do you know why so many people avoid it? Common side effects from consuming MSG include headache, flushing, sweating, facial pressure, numbness, nausea and weakness, according to the Mayo Clinic.

These symptoms are mainly neurological because MSG acts as an “excitotoxin” in your brain, meaning that it speeds up cell reactions to the point that it causes cell death, or “apoptosis.” However, a 2016 study discovered that lycopene protects these cells by inhibiting apoptosis when MSG signaled to the brain it was supposed to happen.

Another function this phytonutrient can serve is in the treatment of candidiasis, better known as yeast infection. Unlike its effects on MSG toxicity, lycopene actually causes apoptosis to the infecting fungal cells. This is effective for both candidiasis in the mouth and vaginal yeast infections.

Not only can lycopene help with infections, but its antioxidant properties even have been found to repair damage in the blood-spinal cord barrier in cases of spinal cord injury. This incredibly recent research is groundbreaking, as destruction of that barrier is part of what causes paralysis to people who suffer spinal cord injury.

Also related to its powerful antioxidative qualities, lycopene plays a role in preventing and slowing several types of cancer, making any foods containing it cancer-fighting foods.

Scientists at the University of Portsmouth studied lycopene’s ability to slow the growth of breast and prostate cancer by interrupting signal pathways that would normally cause the tumors to grow more. Another study including over 46,000 men showed a significant correlation between high lycopene intake and a reduced risk of prostate cancer. That research, published in the American Journal of Clinical Nutrition, specifically noted the consumption of tomato sauce played a critical role in the process.

Similar to its effect on breast and prostate cancer, lycopene also stunts the growth of renal cell carcinoma, the most common type of malignant kidney tumors. This also suggests it has a crucial part in prevention of this cancer.

Another cancer-related treatment use of lycopene is its use against HPV infection, a major cause of uterine cancer. People who supplement their diets with additional lycopene recover faster from this cancer-causing infection than people with low lycopene levels.

It’s the gift from the ground that keeps on giving. Lycopene also protects your eyes from oxidative stress that causes common eye diseases, making it one of the stronger eye vitamins you can consume. In experimentation with cataract development by the Department of Pharmacology at the All India Institute of Medical Sciences, it was discovered that lycopene may have the ability to prevent or delay cataracts in a large majority of cases.

Lycopene also has great effect on the chemical processes that lead to age-related macular degeneration, the leading cause of blindness in the elderly. By exhibiting both antioxidant and anti-inflammatory properties, lycopene slowed and/or stopped a long list of reactions within the cells of the eye that are caused by or lead to macular degeneration in a study out of Taiwan published in Life Sciences.

Neuropathy, or neuropathic pain, is a complex pain condition caused by nerve damage often accompanied by soft tissue damage. Many things can cause neuropathy, from alcoholism to limb amputation to diabetes. It sometimes occurs idiopathically, meaning there’s no obvious cause.

There are few effective treatments for neuropathy, although for some cases, treating the related disease (like diabetes or HIV/AIDS) can help alleviate some of the pain. However, many physicians simply recommend over-the-counter anti-inflammatory drugs to treat the pain — and it rarely responds to these drugs or other traditional pain management techniques.

Tested specifically against diabetic neuropathy, lycopene expressed antinociceptive (pain-inhibiting) capabilities and lowered the overall body mass of the subjects in the study published in the European Journal of Pain. This research indicates that increased lycopene dietary intake has powerful potential to help alleviate the chronic pain those with neuropathy suffer.

5. Good for Your Brain

Lycopene also has compelling neurological benefits. For example, treatment with lycopene has been explored as a possible option to delay the onset and progression of Alzheimer’s disease by correcting cell corruption and protecting healthy cells. In patients who have already developed this potentially debilitating condition, lycopene counteracts future cell damage and death in the brain by interacting with specific mitochondrial interactions that, left unchecked, allow the brain to continue to suffer constant degradation.

In similar processes, this phytonutrient also exhibits restorative properties against epileptic seizures. This is so important, as seizures limit oxygen to the brain and have the potential to cause permanent brain damage if they go on too long. In one 2016 study, scientists discovered that it could not only prevent some future seizures, but that it repaired neural destruction in the brain from past seizures.

Outside of neurological disease, there is also much concern about the presence of diets high in unhealthy fats in the Western world and how it affects cognitive development. Not all fats are the same, and not all of them as are as bad for you as you might expect.

However, considering the linkage between common Western diets and neurological decline, researchers in China found that lycopene stopped memory and learning impairments in subjects on high-fat diets.

From start to finish, lycopene also proves to be a tool in protecting the heart from a large number of common conditions.

It’s one of the nutrients recommended for lowering high blood pressure levels. It prevents several cardiovascular diseases, such as coronary heart disease, myocardial ischemia (reduced blood flow to the heart caused by arterial blockages) and atherosclerosis. Specifically related to research on coronary heart disease, tomato nutrition in particular was named as a determining factor in prevention.

Overall, high levels of lycopene in the bloodstream are associated with a lower mortality rate in people with metabolic syndrome, a combination of disorders that lead to heart disease.

Vitamin K and calcium aren’t the only things that keep your bones strong. Lycopene also helps relieve oxidative stress in bones that cause brittle and weak bone structure. It slows the apoptosis (cell death) that causes bones to weaken and reinforces the cellular architecture of bones, keeping them healthier and stronger. 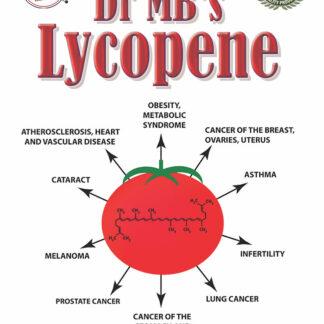