With about 75 percent of women experiencing PMS symptoms, it’s definitely a health topic on a lot of minds. If you suffer from PMS, you are among the many women who experience a number of unpleasant physical and emotional symptoms each month that last anywhere between two to 14 days before your period. The symptoms of PMS can greatly be reduced or even eliminated by making an effort to get your hormones in proper balance. Agnus Castus is one of the top — if not the top — herbal recommendations when it comes to natural PMS relief.

For a woman, inappropriately increased production of prolactin may be a factor in cyclic breast tenderness and other PMS symptoms. Agnus Castus is believed to work well at reducing PMS symptoms because it suppresses the release of prolactin from the pituitary gland. Numerous studies suggest that Agnus Castus may help reduce symptoms of PMS, including breast tenderness, headache and irritable mood. In one review conducted by the Royal Melbourne Institute of Technology and the University in Australia, five out of six studies found Agnus Castus extracts to be superior to a placebo for treating PMS.

Uterine fibroids are non-cancerous tumours found within the uterine walls, often resulting in a change in the size or shape of the uterus as well as several unpleasant symptoms. A key way to prevent and reduce uterine fibroids is to maintain a proper balance of hormones. Agnus Castus can help to balance the ratio of oestrogen to progesterone.

Agnus Castus has been shown to improve fertility, particularly for women with luteal phase defect (shortened second half of the menstrual cycle). These women have trouble because their ovaries don’t release enough progesterone.

In one trial, 48 women (ages 23 to 39) who were diagnosed with infertility took Agnus Castus once daily for three months. During the three-month trial period, seven women became pregnant and 25 women experienced normalised progesterone levels, which can increase the chances for pregnancy.

Another study evaluated 52 women with luteal phase defects due to latent hyperprolactinemia (higher than normal levels of the hormone prolactin in the blood). Each woman received a daily dose of 20 milligrams of Agnus castus preparation or a placebo. The study was aiming to prove if it could reduce the elevated pituitary prolactin and also normalise the deficits in luteal phase length and luteal phase progesterone synthesis.

Results were excellent. After three months, the women treated with Agnus Castus had a reduction in prolactin release, shortened luteal phases were normalised and deficits in the luteal progesterone synthesis were eliminated. Two women in the treated group also got pregnant during the course of the study, and no negative side effects of were seen. These results show Agnus Castus can be utilised as a natural infertility treatment in women.

Hormone imbalances and fluctuations can be a the root of acne, especially if you’re a woman. If you experience monthly outbreaks of acne, especially along your jawline and chin, Agnus Castus might be a perfect acne natural remedy. It can balance your hormones, which can reduce acne formation in women. Preliminary research suggests that it might help clear premenstrual acne, as well, possibly by regulating hormonal influences.

Endometriosis is an often painful disorder in which tissue that normally lines the inside of your uterus grows outside your uterus. It most commonly involves your ovaries, bowels or the tissue lining your pelvis. No one is sure of the exact cause of endometriosis, but some contributing factors include hormonal imbalances and genetics.

You can’t do anything about the genetics factor, but the hormonal imbalance can possibly be overcome with the use of Agnus Castus. To naturally treat endometriosis, Agnus Castus is usually taken long term (12 to 18 months) for maximum effectiveness.

Amenorrhea is a medical condition in which a woman of reproductive age has her menstrual cycle stop suddenly. If you’re not pregnant and your period is irregular or has stopped, it’s a solid indication that something isn’t right.

Amenorrhea can be caused by a number of factors with one possibility including having too much prolactin in your body, which can cause hypoestrogenism or oestrogen deficiency. Agnus Castus supplementation can help to modulate prolactin and get a healthy balance of oestrogen and progesterone back on track.

In Europe, Agnus Castus is one of the most highly acclaimed herbs for promoting lactation. One study found that supplementation with a Agnus Castus could increase the amount of milk produced by mothers with or without pregnancy complications, as noted by the University of Michigan Health System. Herbs like Agnus Castus that promote or increase the flow breastmilk flow are known as galactagogues.

There is not a lot of evidence to support Agnus Castus being safe or unsafe for women who are actively breast-feeding their babies so check with your doctor before taking it.

Menopause is the permanent end of menstruation and fertility, defined as occurring 12 months after your last menstrual period. It can happen in your 40s or 50s, but the average age is 51 in the U.S. Agnus Castus is often combined with other herbs, such as black cohosh or dong quai, for maximum benefits.

One 2007 study published in Gynecological Endocrinology found that an herbal supplement containing Agnus Castus provided safe and effective relief of hot flushes and sleep disturbances in pre- and postmenopausal women. Another 2015 study found that a supplement containing Agnus Castus as a key ingredient was able to reduce moderate to severe menopause symptoms.

Benign prostatic hyperplasia is an age-associated prostate gland enlargement that can cause urination difficulty. A 2005 study conducted by the Institute of Pharmaceutical Biology at the University of Basel in Switzerland showed that extracts of Agnus Castus fruits can be useful for the prevention and treatment not only of an enlarged prostate, but also prostate cancer. Data showed that Agnus Castus contains components that inhibit proliferation and kills prostate cancer cells.

Be the first to review “Agnus Castus 5000mg” Cancel reply 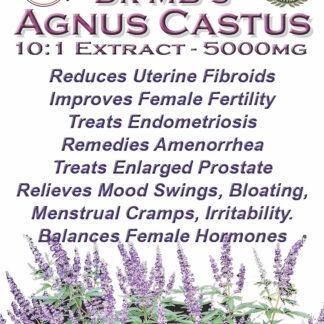