Our L-Carnosine is a 1000mg capsule which highly absorbable and most effective.

In the human body, concentrations of carnosine are greatest in muscle tissue.

What is muscle Carnosine? Since it is found in such high concentrations in the muscles, it’s sometimes referred to as muscle Carnosine, but it can also be found in brain tissue, the heart and many other parts of the body.

Carnosine, also known by many other names including L-Carnosine and n-acetyl-carnosine, is considered a dipeptide.

What’s a dipeptide? A simple dipeptide definition is an organic compound derived from two amino acids.

Carnosine is synthesized in skeletal muscle from the amino acids histidine and beta-alanine. So the body makes Carnosine, and it can also be obtained through the diet.

“L-carnosine” and “carnosine” can just be two different names for the same compound, but carnosine can come in a few forms. The “L” in front denotes that it is the form that can be readily used by the body’s cells.

Potential carnosine benefits include the prevention and treatment of diabetic complications such as nerve damage, kidney problems and eye disorders like cataracts. Another one of the top potential L-carnosine benefits is a reduction in the signs of aging.

In fact, it’s sometimes referred to as the “longevity molecule.” People are also known to use it to boost stamina and muscle strength. It is key to the correct function and development of the muscles, heart, liver, kidneys, brain and many other organs.

According to a scientific article published in 2017, “Carnosine, an over-the-counter food supplement, has a promising potential for the prevention and treatment of chronic diseases such as type 2 diabetes, cardiovascular and neurodegenerative diseases through its anti-inflammatory, antiglycation, antioxidative and chelating effects.”

A pilot double-blind, randomized clinical trial published in 2016 evaluated the effects of supplementation on 30 nondiabetic individuals who were either overweight or obese. Half of the subjects took two grams of carnosine daily, and the other half took a placebo for a 12-week period.

The results were positive: Subjects who took carnosine had improved insulin resistance and lower glucose levels compared to placebo takers. Overall, the researchers concluded, “carnosine supplementation may be an effective strategy for prevention of type 2 diabetes.”

More clinical studies are still needed, but so far animal and lab studies are pointing toward carnosine’s ability to decrease the buildup of amyloid beta, which is the main component of the plaque found in the brains of Alzheimer patients.

In addition to some studies with positive results, a double-blind, randomized controlled clinical trial found that healthy elderly people who took a supplement containing carnosine as well as anserine experienced an improvement in their age-related decline in brain blood flow (which occurs in Alzheimer’s disease) after three months of supplementation. The 39 healthy elderly volunteers (between the ages of 60–78 years old) also saw improvements in memory, specifically verbal episodic memory.

Is it possible carnosine eye drops may be able to help cataracts?

A randomized, placebo-controlled study had 26 patients (41 eyes) use topical one percent n-acetylcarnosine (NAC) eyedrops twice daily while the 13 patients (21 eyes) in the control group received placebo eyedrops. There were also 10 patients (14 eyes) who did not receive any eyedrops at all.

However, recent scientific reviews believe that “there is currently convincing evidence that NAC reverses cataract, and prevents progression of cataract”.

Polaprezinc is an orally bioavailable chelate composed of zinc, and L-carnosine that is said to have potential gastroprotective, antioxidant, anti-ulcer and anti-inflammatory abilities. Oral supplementation with polaprezinc has been shown to increase the expression of a number of beneficial antioxidant enzymes, including superoxide dismutase, heme oxygenas, glutathione S-transferase, glutathione peroxidase and peroxidredoxin-1 in the gastric mucosa, which protect cells against reactive oxygen species.

If you read online reviews, you will likely see people claiming their skin looks more youthful after taking this supplement. Is that possible? 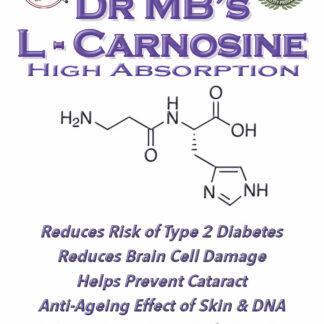