This highly Potent is the Extract of the “Super Fruit” Hawthorn Berry.

The benefits of taking this supplement is enormous. . . .

Hawthorn is used for diseases of the heart and blood vessels such as congestive heart failure (CHF), chest pain, and irregular heartbeat. It is also used to treat both low blood pressure and high blood pressure, “hardening of the arteries” (atherosclerosis), and high cholesterol. So far, research suggests that hawthorn is very effective in treating congestive heart failure.

Some people use hawthorn for digestive system complaints such as indigestion, diarrhea, and stomach pain. It is also used to reduce anxiety, as a sedative, to increase urine output, and for menstrual problems.

Hawthorn is also used to treat tapeworm and other intestinal infections.

To learn more about this Super Fruit keep reading. . . .

Hawthorn berry is best known for its helpful toning effects on the heart. As a “cardiotonic herb,” hawthorn has shown itself to be impressively helpful for all kinds of serious heart concerns. These include heart failure, heart disease, angina pectoris, changes in cardiac rhythm, and atherosclerosis. According to a 2016 study published in the journal Current Medicinal Chemistry, hawthorn’s powerful heart benefits come from its high polyphenolic content.

To date, research has shown that hawthorn can even have a helpful effect on congestive heart failure (CHF). Multiple studies have shown that hawthorn supplementation has resulted in improved in cardiac function based on a number of parameters. These parameters include blood pressure, heart rate, cardiac output and exercise tolerance.

One trial in particular gave 78 patients with NYHA Class II heart failure a commercial preparation of hawthorn leaves and flowers. After two months, the patients receiving 200 milligrams of hawthorn three times per day had an increased working heart capacity, as well as a reduction in symptoms. The hawthorn group also showed a decrease in systolic blood pressure during physical activity. Another German study also showed that a hawthorn extract worked nearly as well as a prescription heart failure drug (captopril). And, the hawthorn extract had NO side effects.

Another cohort study of 952 patients with heart failure (NYHA II) had subjects take a hawthorn extract. After two years, fatigue, stress dyspnoea and palpitations (the three main symptoms of heart failure) were all significantly decreased in the group who took the hawthorn compared to the group who did not take hawthorn.

Many herbal practitioners recommend hawthorn berries, flowers and leaves as natural blood pressure reducers. A scientific study published in The British Journal of General Practice had 79 type 2 diabetic patients either take 1200 milligrams of hawthorn extract daily or a placebo for a total of 16 weeks. Hypotensive drugs were also taken by 71 percent of the study participants. What did they find? The hawthorn group experienced greater reductions in blood pressure. Hopefully more studies to back up hawthorn’s usage in lowering blood pressure are coming soon.

Decreased blood flow to the heart causes chest pain known as angina. Sometimes it is confused with indigestion. But, true angina can be a symptom of coronary heart disease. So far, research is showing that hawthorn may be an effective natural remedy for avoiding and treating angina.

According to a scientific article published in the Journal of Herbal Medicine and Toxicology, hawthorn’s bioflavonoids help to dilate both peripheral and coronary blood vessels. This can improve blood flow to the heart, making hawthorn very useful for angina. Hawthorn’s proanthocyanidins are also believed to reduce tension of the blood vessel walls. Again, this is very helpful to discourage angina.

In one study, 80 subjects (aged 45 to 65 years) with stable angina pectoris were randomly divided into four groups. The first group was the aerobic exercise group. The second group took a hawthorn extract. The third group did aerobic exercise, plus they took a hawthorn extract. Finally, the fourth group was the control group. After 12 weeks, the researchers found that the combination of aerobic exercise and hawthorn supplementation were “an effective complementary strategy to significantly lower the risk of atherosclerosis and heart problems.”

Studies have shown that hawthorn berry extract may be a helpful natural remedy for the reduction of LDL (“bad”) cholesterol from the body. In China, hawthorn is called “Shan-Zha.” A study showed some really impressive health results from an ethanol extract of Zhongtian hawthorn, a cultivar of wild Shan-Zha, which has larger hawthorn fruit. This 2016 study revealed that the hawthorn berry extract not only reduced overall high cholesterol levels, it also notably decreased LDL cholesterol, liver cholesterol and triglycerides as well as body weight.

Scientific research conducted in 2008 revealed that hawthorn berry extract is excellent at decreasing inflammation. This is huge for health since we know that inflammation is at the root of most diseases. The research also shows that the extract of hawthorn berry is a free radical scavenger. This is extremely beneficial to human health since free radicals can cause cellular damage (including DNA damage) by stealing electrons through a process called oxidation. The 2008 study also demonstrated how hawthorn berry extract has protective effects for the gastrointestinal system and it appears to successfully kill off various types of unwanted bacteria. 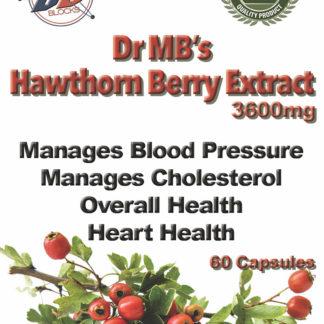