Suffer from chronic headaches and migraines? Looking for a natural remedy that has a proven track record of success in preventing and treating some of the worst headaches imaginable? You might want to try feverfew, an herb that’s well-known for being a potent natural headache remedy.

Feverfew’s pain-easing effect is said to come from a biochemical called parthenolides, which combat the widening of blood vessels that occurs in migraines. It may even be more effective than other nonsteroidal anti-inflammatories (NSAIDS), like aspirin! With at least 36 million Americans currently suffering from migraines, the search for relief is on a lot of hurting minds.

Research shows that consuming feverfew helps reduces the frequency and get rid of migraine headaches and headache symptoms, including pain, nausea, vomiting, and sensitivity to light and noise.

Several impressive human studies shown the positive effects of using feverfew to prevent and treat migraines. A survey of 270 people with migraines in Great Britain found that more than 70 percent of them felt much better after taking an average of two to three fresh leaves daily.

Another study published in Clinical Drug Investigation used a combination of feverfew and white willow bark, which has chemicals like aspirin. People who took the combination twice a day for 12 weeks had fewer migraines, and the pain did not last as long or hurt as much.

In addition, a systematic review completed by the School of Postgraduate Medicine and Health Science in the U.K. compared the results of six studies. Researchers found that feverfew is effective in the prevention of migraine headaches and doesn’t pose any major safely concerns.

As you can see, numerous studies confirm it’s a sure bet when it comes to natural migraine relief!

Rheumatoid arthritis is a chronic inflammatory disorder that typically affects the small joints in the hands and feet. An autoimmune disorder, rheumatoid arthritis occurs when your immune system mistakenly attacks your own body’s tissues. Feverfew is thought to hinder the production of prostaglandins, the hormone-like substances that cause pain and inflammation.

In a 1989 study of women with symptomatic rheumatoid arthritis, feverfew was tested as a form of relief since laboratory tests previously showed that it can generally reduce inflammation. The women took dosages of 76 milligrams of dried, powdered feverfew leaf but acknowledged that 100–125 milligrams was previously suggested as an effective dosage. The researchers ultimately admit that perhaps at larger doses might have some benefit for rheumatoid arthritis.

While more research is needed, another 2009 study conducted by the Department of Orthopaedics at Osaka University Graduate School of Medicine also found that the parthenolide “ameliorated the severity of joint destruction in experimental animal model,” concluding it helps in a natural arthritis diet.

Dermatitis is a general term that describes an inflammation of the skin. It has many causes and occurs in many forms. Dermatitis usually involves an itchy rash on swollen, reddened skin. Feverfew is a potent anti-inflammatory that’s particularly effective at calming redness.

Studies have shown that it may help reduce damaged skin cells and inflammation, in addition to helping relieve dermatitis and improve the appearance of the skin. In 2009, researchers showed that feverfew extracts (with parthenolide removed) had potent anti-inflammatory activity, suggesting that this botanical is effective at relieving skin inflammation without inducing immune sensitization.

If you have rosacea or regularly experience rash reactions, a topical remedy containing feverfew could likely offer relief, making it an effective rosacea treatment and rash natural remedy. It also naturally protects the skin from UV rays.

Among the tested constituents of feverfew (parthenolide, camphor, luteolin and apigenin), parthenolide showed the highest inhibitory effect. While it has yet to get widespread attention as a natural cancer fighter, the research is promising!

Typically, blood flows through our arteries and veins smoothly and efficiently, but if a clot, or thrombus, blocks the smooth flow of blood, then the result (called thrombosis) can be very serious and even cause death. Serious problems arising from clots in blood vessels include heart attack and stroke.

Research indicates that feverfew may have antithrombotic potential. As an antithrombotic agent, it can help prevent blood clots from forming and growing — and hence reduce the risk of death from heart attack or stroke! 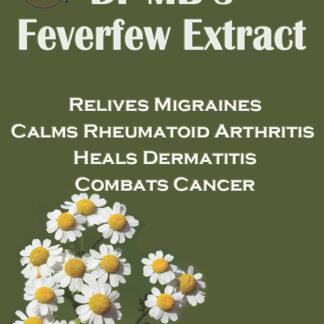