Seaweed: It’s not just for sushi anymore. In fact, kelp, a form of seaweed, has made its way into kitchens of health-conscious people all over the world — and that’s perfectly OK with me.

Considered by many to be a superfood because of its wide variety of nutrients, kelp has been a staple of several Asian cultures for centuries. While its popularity in the western world is a more recent event, as more people discover the many benefits this vegetable has to offer, it’s quickly becoming part of a healthy, balanced diet for a large number of Americans as well.

This seaweed is effective in weight loss, supports thyroid health, has been proven to reduce the risk of many forms of cancer and even keeps your bones strong. Get to know the power of mighty kelp. . . . . . .

Categories: Bone & Joints, Cancer, Sugar Control, Weight Management
Share this with the people you care for.

Do you know if you’re eating enough iodine? That’s an important question, because iodine-rich foods help protect you from a dangerous deficiency. Iodine is a vital nutrient that helps support a healthy thyroid, protects against certain kinds of cancer, promotes healthy growth and development in babies and children, and even helps you maintain a healthy brain.

Because kelp contains an extremely high level of iodine (up to 2,984 micrograms in some varieties), it’s one of the best ways to maintain a healthy level of iodine. Powdered kelp has been used to treat hypothyroidism in patients with severe motor intellectual disabilities, who are at a very high risk of iodine deficiency.

Not only is kelp a nutrient-rich food that’s beneficial to any diet, but it also has specific fat-fighting properties. A protein found in most varieties, known as fucoxanthin, has been shown to significantly reduce fat tissue — one of the reasons I recommend it as a healthy weight loss supplement. A study out of Moscow also found that a combination of pomegranate seed oil with fucoxanthin promoted weight loss and increased liver function.

Another way kelp can be helpful when losing weight is by the presence of particular molecules known as alginates. These alginates are prevalent in some varieties of kelp more than others. One study studied the effect of kelp on pancreatic lipase, finding that its consumption reduced this process by which the pancreas overprocesses fat and stores too much in the body. Instead, this seaweed was a vital factor in helping the body expel fat via excrement, rather than absorb large amounts. Essentially, this means it’s considered a lipase inhibitor.

3. May Prevent or Treat Diabetes

Those at risk for or who have diabetes may also find kelp a welcome addition to their diabetic diet plan. A Korean study published in Nutrition Research and Practice found that kelp consumption greatly improved blood glucose levels, positively influenced glycemic control and increased antioxidant enzyme activities in patients with type II diabetes.

4. Helps with Some Blood-Related Disorders

There’s a power nutrient found in many varieties of kelp that, among other things, has shown effectiveness against blood-related problems. It’s called fucoidan.

Fucoidan has shown effectiveness in preventing blood clots that can lead to dangerous health problems, including stroke and heart attack. It’s so effective, in fact, that researchers cite it as having potential to be used as an oral antithrombotic agent, potentially reducing the need of prescription drugs to treat clotting problems. This may be relevant especially to those suffering from or at risk for diabetes, as a common complication of diabetes includes excessive clotting — making this brown seaweed a double-whammy on diabetes.

Fucoidan also protects cells in your body from ischemic damage, meaning damage caused by improper levels of blood flow to certain parts of the body.

5. Slows the Growth of Many Types of Cancer

Multiple nutrients in kelp function in tandem to give you protection against cancer. The presence of fucoxanthin was found to be effective against a number of types of prostate cancer. In addition, fucoxanthin can help remove drug resistance in cancer patients undergoing dangerous chemotherapy treatments, thereby reducing the amount of harmful drugs introduced into one’s system in order to treat cancer. While my recommendation is generally to avoid traditional cancer treatments, the impact is still significant for many who choose to go that route.

However, when it comes to cancer-fighting nutrients, fucoidan wins the top spot. Studies on fucoidan have found that it causes cancer cells to die (a process known as “apoptosis”) in leukemia, colon, breast and lung cancer. It’s the fucoidan and fucoxanthin combo that makes this sea vegetable one of the most effective cancer-fighting foods.

As a general defense against most diseases, I always recommend following a diet rich in anti-inflammatory foods. Inflammation is at the root of most diseases, and it’s hypothesized that chronic inflammation may be caused by an overactive immune system, flooding the body with dangerous hormones.

Certain kinds of kelp have been shown to have anti-inflammatory properties (and serve as antioxidants), meaning they help reduce the overall inflammation in your body, which in turn reduces your probability of disease. Fucoidan, found in kelp, has also been shown to work as an anti-inflammatory and also to improve cholesterol levels in the blood, responsible for heart conditions.

Are you at risk for osteoporosis or other bone diseases? Kelp can help with that, too! First, it’s a rich source of vitamin K — you get almost a quarter of the daily recommended intake of vitamin K in just one serving. One of the many benefits of vitamin K is its role in creating denser bones that don’t as easily succumb to arthritis and osteoporosis. It’s also worthwhile to note that if you’ve been on antibiotics lately, you might need to increase your vitamin K intake to avoid vitamin K deficiency.

However, people on blood-thinning drugs ought to avoid extra vitamin K, as it can affect how the drugs work. 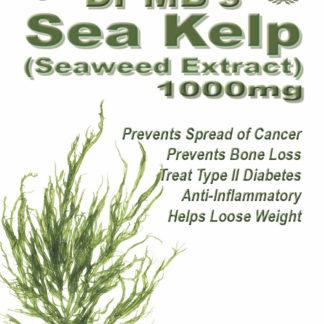